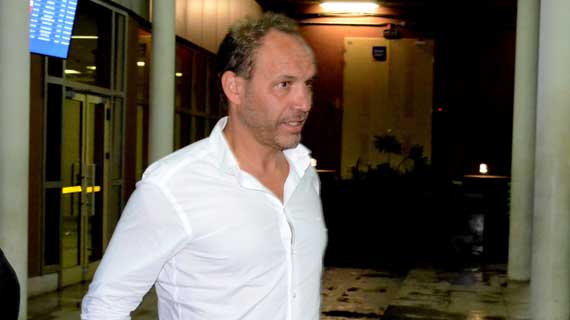 Harambee Stars' head coach has defended his number one keeper Patrick Matasi saying he has done a lot for the team in the past matches and should not be judged by one goal.

Harambee Stars head coach Sebastian Migne arrives at the JKIA from their Match away in Ghana.

Harambee Stars head coach Sebastien Migne has defended keeper Patrick Matasi over the goal he conceded in Saturday’s 1-0 defeat against Ghana in the final African Cup of Nations qualification match in Accra.

Matasi let Caleb Ekuban’s 83rd minute shot slip under his arms in an easy way, attracting huge criticism from Kenyan fans who thought it was a lousy goal for the keeper to concede. But, Migne has come in defense of his number one saying he should not be judged for a single mistake.

He added; “It is different for a keeper because when anyone else commits a mistake, there is always someone who comes up and covers but when you are a keeper, your mistake is more difficult.”

Migne says he was disappointed with the loss, but notes he picked up positives that will help him prepare the squad for the final tournament in Egypt in June.

“We had done very well for 83 minutes and was on the way to picking a good result against a giant in African football but we lost concentration. In the high level, it is how you play up to 90 minutes. For us, we played well for 83 minutes,” the French tactician offered.