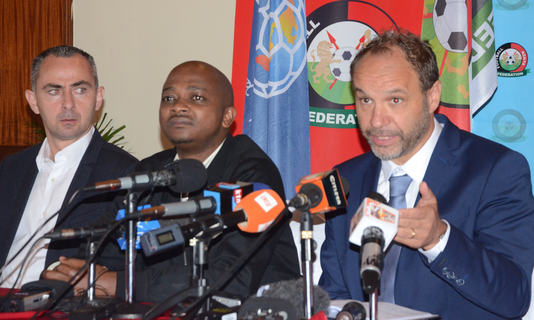 New Harambee Stars Coach Sébastien Migne has made his first call-up for the national team.21 players will undergo one day trial at Camp Toyoyo

New Harambee Stars coach Sébastien Migné has summoned 21-locally based payers for a one day training camp at Camp Toyoyo on May 15, 2018.

Migné who is two weeks old into the job seeks to assess the players in readiness for upcoming friendlies for the national team.The intensive training will be conducted between 8 am and 11 am and later on at 4 pm to 6 pm

Conspicuously missing from the list of 21 posted on FKF website are Gor Mahia players but the fact that the team will  engaged in continental means he will be able to assess them from the stands.

Notable inclusions in the list are leading KPL top scorer Elvis Rupia. Youngsters Yusuf Mainge and Marvin Onyango who are in the National Under 20 side also have a chance to impress the Frenchman.

Former Gor Mahia skipper Musa Mohammed and Eric Ouma who are unattached have also found their way into  Migné’s shortlist.

KPL side Kariobangi Sharks has six players in the shortlist followed by AFC leopards who have five players.Mathare United’s Cliff Nyakeya who has been in sizzling form has also made the list alongside teammate David Owino.