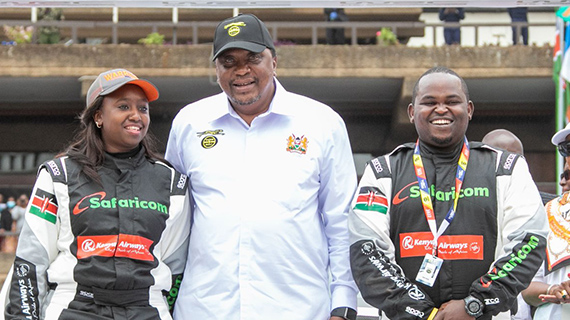 True to her prediction of a better finish compared to last season, she made all her local knowledge count on her debut in the M-Sport Poland Ford Rally 3 car where she was a surprise winner in the WRC3 category.

Maxine Wahome and her Navigator Murage Waigwa with Kenya's president H.E. Uhuru Kenyatta during the WRC Rally flag off in Nairobi

When Maxine Wahome began her rally-sport journey in June 2021, little did she know that her venture into the pinnacle of motor rallying in Kenya would come with good tidings 12 months later.

Maxine was only taking her baby steps towards a brighter future which had already taken shape with motorcross bikes, an autocross Impreza -and most important - finishing last year’s WRC Safari Rally Kenya on her rallying debut.But the year 2022 has been a huge one for the kindergarten teacher whose cockpit performance continues to speak volumes about her driving knack.

Two months ago, Maxine emerged the winner of the Inaugural Lioness All-Women's Rally at Kasarani where she edged Natasha Tundo to a nerve-racking speed test tussle.

Two months later, the soft-spoken driver is at it again. She is now enjoying global recognition, not only for her cockpit knack but for finding her niche in performance manufacturer race cars.

Maxine navigated by Murage Waigwa is incidentally one of the four Kenyans currently on FIA Rally Star Program alongside Hamza Anwar, Jeremy Wahome and McRae Kimathi. The four are sponsored by Safaricom and Kenya Airways who recently announced a joint sponsorship of Kshs.45 million towards their rally expenses.

True to her prediction of a better finish compared to last season, she made all her local knowledge count on her debut in the M-Sport Poland Ford Rally 3 car where she was a surprise winner in the WRC3 category.

“It’s unbelievable. I am equally flabbergasted. I mean, we started off really well and maintained a steady pace through and through. On the second day, on Friday, we clung on to the lead and came back to the finish as the surprise winner of the WRC3 category which is two steps below the WRC category,” reflected on her return to last service at Naivasha's Wildlife Research and Training Institute Maxine.

Following a late retirement on Friday night which saw her incur a 10-minute penalty and relinquish the lead to Mcrae Kimathi, Wahome did not have to wait too long to go back to the summit on Saturday morning despite some troubles of her own.

The rising Kenyan rally Queen had a scare on Saturday morning’s opening stage Soysambu 1, when she experienced a computer issue in her Ford Fiesta, seeing her lose six minutes.

However, FIA Junior WRC regular Kimathi struck a rock in the line on the same stage nearing the 15km mark, sustaining significant rear and front suspension damage, bringing an abrupt end to his day.

Looking up to a better future, Maxine in a previous interview says she is working to better her performance in her new car by entering as many races as possible.

“To improve,one needs to spend alot of time in the car. I would like to make sure I race at least twice a month.” She said.

The Finn, Rovanpera goes into the next round in Estonia with more confidence having already chalked up four wins this season in  Sweden ,Croatia, Portugal and Kenya’s Safari Rally.

● Teaches Early Learners (nursery) between the age of 2-6 at a Montessori School in Nairobi. 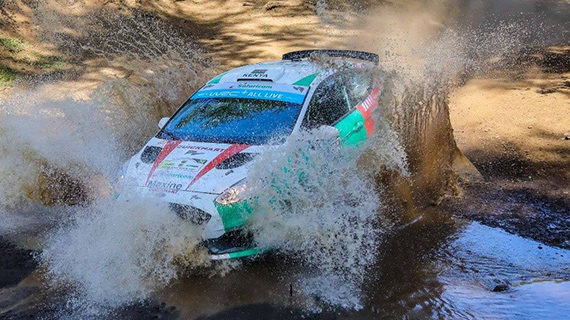