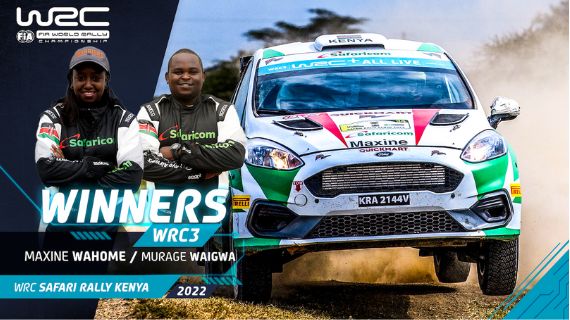 Maxine Wahome created history by becoming the first Kenyan female to win a WRC support championship round, taking out WRC3 victory on home soil at the Safari Rally.

Maxine Wahome created history by becoming the first Kenyan female to win a WRC support championship round, taking out WRC3 victory on home soil at the Safari Rally.

FIA Junior WRC regular Mcrae Kimathi rounded out the all-Kenyan podium over 10 minutes behind at the end of a brutal event which forced every driver into retirement at least once.

Wahome's winning performance was made all the more impressive by the fact she had never driven the Fiesta car on gravel prior to the start.

“My goal was just to learn the car and day by day improve my speed,” she said at the finish. “Wednesday was my first time in the car - I normally drive a Subaru Impreza N12. The only testing I got with the car was on Tarmac, which is completely different to the Safari.

“The mission today was to make it through the stages slow and steady to get it to the finish and learn more about the car. The gap was already big,” she added.

Wahome's rally very nearly unravelled on Friday evening when she was sidelined by an engine control unit fault on the final test, but the youngster was able to restart on Saturday and reclaimed top spot as her rivals came unstuck.

Hamza Anwar threatened to break her stride and clawed back over two and a half minutes on Sunday morning, but he retired with two stages remaining.