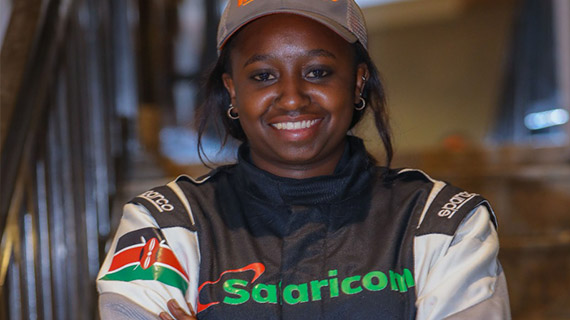 Maxine Wahome is attributing her surprise WRC3 overnight lead to steady speed and caution. The daughter of former Safari veteran (Jimmy Wahome) is making her WRC3 debut incidentally on her very first outing behind the wheel of an M-Sport Poland Ford Fiesta Rally3.

Asked about her overnight lead, the soft spoken Maxine commented: "I took it easy from the onset as I continued to learn the dynamics of the new Fiesta. It was really tough navigating the dust and rough stages but with the good effort of my navigator (Murage Waigwa), we kept improving on our driving lines. We managed a steady speed as the rally wore which was key to our end of day result in the summit," Maxine explained.

"It's such a great feeling making my WRC3 debut on home soil and coming back to service with good tidings on our top timings. The essence tomorrow will be to maintain a steady pace," quipped Wahome who topped the all-Ford Fiesta Rally3 tussle by 25.6sec over of FIA Junior WRC mainstay and compatriot Mcrae Kimathi.

Maxine finished fifth in class in Thursday’s Kasarani Super Special Stage in Nairobi but the 26-year-old former motocross rider worked her way up the leader board and no eyebrows were raised when she  seized the lead  by midday service after her race adversaries suffered gremlins.

Jeremy Wahome one of the four Kenyan FIA Rally Star drivers alongside her namesake Maxine Wahome bore the full brunt of Naivasha fesh fesh stages after he exited with an engine control unit problem on the first pass of Loldia speed test.

Day one leader Diego Dominguez was not spared. He also hit trouble in the dusty sections. The Paraguayan savoured a 1min 36sec advantage on the three--stage first loop but suffered a heavy front-end impact and retired.

The same stage caught out Hamza Anwar, who dropped from second to last after getting stuck in the unforgiving fesh-fesh sand.

Dominguez is expected to restart tomorrow on the super rally ruke in third spot, 35min 14sec behind Wahome and 2min 7sec clear of fourth-placed Anwar.

Maxine is one of the Four Kenyan junior Rally Stars who are taking part in the WRC Safari Rally this year. The four: Maxine, Jeremy Wahome, Hamza Anwar and Macrae Kimathi are sponsored by Safaricom and Kenya Airways   through the FIA Rally Star programme that seeks to support young drivers.