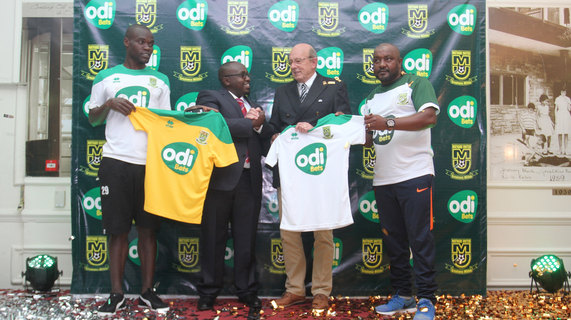 Mathare United have announced new gaming firm Odibets as their new shirt sponsors over the next three years in a deal worth Sh60mn. The partnership was unveiled on Wednesday morning at a Nairobi Hotel, though Mathare had already donned the company’s branded jerseys in their 2-2 draw with Gor Mahia over the weekend.

This will be one of the largest sponsorship perks for the club who had the Ng’ombe brand infront of their jerseys, but the same will now be displayed at the back.

“We’re really excited to announce this partnership with Mathare United FC, a Club with great heritage and significance in Kenya’s footballing scene. The club are coming off a very impressive season as the most improved team in the KPL and we can’t wait to see how the next few seasons unfold,” OdiBets Country Marketing Manager Dedan Mungai said.

Bob Munro, Mathare United’s Chairman and founder commented, “The past few seasons have been particularly successful for the Club both on and off the pitch despite some financing challenges. This sponsorship will certainly give the Club the stability it needs to forge ahead and compete for the KPL title.”

A key part of the sponsorship with OdiBets will be the development of grassroots football activities and charitable outreach programmes in conjunction with Mathare United to promote the causes that both entities are committed to.