Masoud Juma features as the Brazilians down Cape Town City 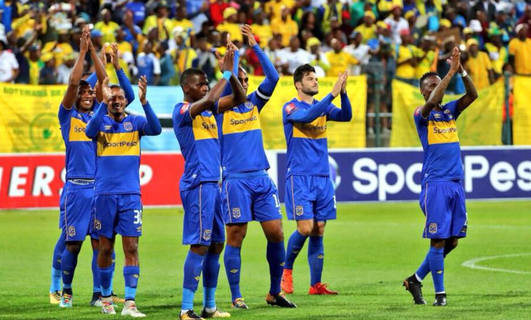 Kenyan striker Masoud Juma earned some minutes in Cape Town City FC jersey after coming on a substitute in the second half during the Nedbank Cup match against  Mamelodi Sundowns on Sunday 1st April, 2018.

Percy Tau and Hlompho Kekana netted for Mamelodi Sundowns also known as the Brazilians while Bradley Ralani pulled one back but it was not enough to hand  Cape Town City a spot  in the Nedbank Cup semi-finals.

Masoud Juma joined action at the Cape Town  Stadium in the 62nd minute coming on as a sub for Mpho Matsi. Even though he did not find the net, he gave a god account of himself.

Former AFC Leopards star Ugandan Allan Katerega also produced a sublime performance after coming on as a second half substitute.

Juma who is the 2017 Kenyan Premier League golden boot winner has been out of action after suffering an injury during the Cecafa Senior Challenge Cup with Harambee Stars last December.

He joined  the South Africa Premier Soccer  League (PSL) club  Cape Town City  early this year after a dream season in KPL where he bagged 18 league goals to emerge the top scorer.

Cape Town City will participate in the second edition of the SportPesa Super Cup tournament to be held in Kenya from 4th to 10th June, 2018.