Maru and Chepkemoi claim a Kenyan double in Valencia 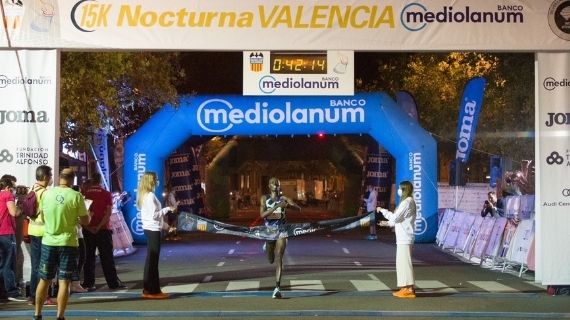 The Kenyan pair of Emmanuel Maru and Joyce Chepkemoi took commanding victories at the 15km Nocturna Valencia Banco Mediolanum on Saturday 18 September 2021 in the Mediterranean Spanish city which has witnessed a plethora of world records on road events in previous years.

The men’s race began at a steady 2:50-per-kilometre pace and the large nine-man pack went through the opening 5km in 14:12 behind schedule to break the course record of 41.55 set in 2019. All the main favourites were in the lead pack, led by Kenya’s Emmanuel Bor and his compatriot Maru. Bor’s relentless rhythm paid dividends and by the seventh kilometre only two athletes remained in touch in the guise of Maru and Joseph Karanja.

After a 28:16 10km split, Bor began to lose ground with the clock reading 33 minutes, and Maru took advantage to unleash his devastating change of speed and open a sizeable advantage over his pursuers.

Maru’s late burst of speed didn’t prove to be enough to threaten the course record and he had to settle for a 42:14 clocking, head and shoulders ahead of Karanja, runner-up in 42:36, while Bor completed the podium still under the 43-minute barrier (42:49).

By far the main attraction in the women’s event was Burundi’s Francine Niyonsaba, fresh from setting a world 2000m record of 5:21.56 four days earlier in Zagreb. Yet the Olympic 10,000m fifth-place finisher only could stay in the leading group for the opening three kilometres as the pace, dictated by Kenyans Gladys Chepkurui and Chepkemoi, proved too fast for the two-time world indoor 800m champion who was running her first ever race of more than 10km.

The Kenyan tandem reached the 5km checkpoint in 15:38 while Niyonsaba travelled back in third. Shortly afterwards Chepkurui managed to leave Chepkemoi behind but her lead was short-lived as the latter caught Chepkurui a couple of kilometres later. The pair went through the 10km point slightly under 32 minutes to dash any hope of breaking the course record of 46:52 set two years ago.

The 26-year-old Chepkemoi made her move with less than three kilometres left, when she easily broke away from her fellow Kenyan to romp home unopposed in 47:24. A fading Chepkurui crossed the finish line over one minute in arrears (48:30), with Niyonsaba being a distant third in 50:37. The victor holds a 10,000m lifetime best of 30:59.01 set in Hengelo last June.

More than 6000 runners took part in the event.