Marathon battle of the teams launched in Prague 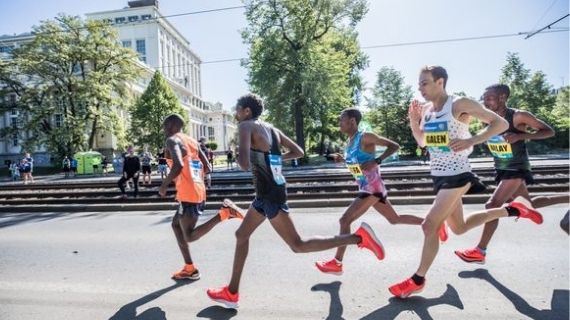 Drawing inspiration from the Tour de France and Formula One motor-racing, the event on May 30 will see four teams consisting of eight runners in a marathon through the streets of the Czech Republic capital.

The marathon is traditionally considered a lonely, individual pursuit. That is about to change next month, though, when a new ‘battle of the teams’ race is launched in Prague.

Drawing inspiration from the Tour de France and Formula One motor-racing, the event on May 30 will see four teams consisting of eight runners in a marathon through the streets of the Czech Republic capital.

Each team will be supported by a corporate sponsor and will include four men and four women of various standards and from different parts of the world, although one member of each team will be from the Czech Republic.

Starting on the historic Charles Bridge and finishing in the Old Town Square, the race features a spectator-friendly 13-lap course. Due to the pandemic, though, spectators will be encouraged to watch online or on television – mainly by the fact it kicks off at 6.30am (5.30am BST).

It is an elite-only race, too, with only the marathon teams and about 80 top Czech runners due to the event doubling up as the national marathon championships, which means the event can help athletes gain last-minute Olympic qualifying times. Of the eight competitors in each team, six will ‘score’ with two ‘bench runners’ and results will be based on the World Athletics scoring system.

“A game changer,” is how organisers RunCzech describe it.

Race director Carlo Capalbo says: “When the world shut down because of Covid-19, people were desperate, in wanting to continue to see great team competition. This event was designed to satisfy that hunger.

“But this new twist also makes the sport vastly more interesting for people with a casual interest in the marathon, and for runners themselves.”

Capalbo adds that what he calls “the elephant in the room” in marathon running is the fact many of the runners who complete 26.2 miles in three to four hours often neither know nor care who actually won the race. But he hopes this battle of the teams concept will help solve this.

To make the event easier to follow for fans, teams will wear different coloured kits, there will be real-time results and statistics during the coverage and each team will have a celebrity captain, such as footballer Petr Cech.

RunCzech have a successful track record so far. They already stage the Volkswagen Prague Marathon and other Gold Label running events around the Czech Republic and Europe.

Initial plans for the event involve it being staged for the next three years but no one is sure how it will evolve. More sponsors may enjoy the idea and get involved. There is also the scope to pit ‘city teams’ against each other, or even national or continental teams.

“We could also see in the years to come thousands of virtual teams,” says Capaldo.