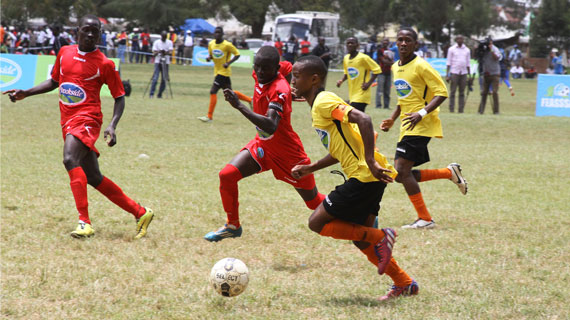 Malava ran over Apapen of Rwanda 3-0 in the final match played at Eldoret Polytechnic.

It was a sweet victory for Malava who had lost narrowly last year to Rusumo in the finals but it ensured the former defending champions will not go back home with the title but remained in Kenya.

The victors dominated in blocking and spiking suppressing their opponents efforts to overtake them in the sets.

They easily beat Apapen  25-16 in the first set courtesy of good service and back court coverage which ensure the ball heads to the booster to feed his side.

Apapen improved its attack in the second set but Malava took it 25-20 before sealing the victory with 25-18 in the third set to earn Kenya a second volleyball title after AIC Kosirai won the girls category.

Elated by the victory, Malava coach Shadrack Tovoko was full of praise for his side for not relenting in the fight until they bagged the trophy.

“It is not easy to win by three straight sets especially when you are playing in the regional competitions. It is normally difficult because of the strong teams participating but the boys worked hard to win all the sets,”Tovoko said.

“The title slipped  us last year and even when we lost in the nationals, we were determined for this and sure the boys did it,”Tovoko said.

In football playoffs, Kenya’s Bukembe lost to Kibuli of Uganda despite enjoying huge support more than Kenyan teams that featured in the competition.

The highly fancied team which entered the competition as underdogs having finished fourth in the nationals went down1-2 in an encounter at Hill School Eldoret.

Captain Benjamin Masai thanked his side for the performance saying they tried in their debut but promised to come back next year more focused.