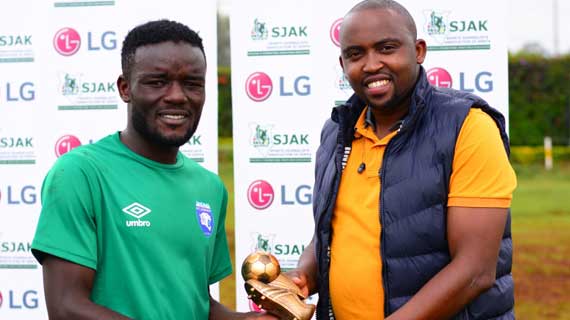 LG electronics' Hiram Macharia presents the SJAK player of the month award to John Makwatta during the ceremony at the Kenya school of Law on October 30,2019

Prolific AFC Leopards striker John Makwata has claimed the SJAK/LG Player of the Month Award for August/September. Makwata has been the face of Ingwe's revival and trounced team mate Benjamin Ochan and Gor Mahia skipper Kenneth Muguna to claim the gong.

With just four matches played over the period, Makwata helped himself to three match winning goals that swayed fourteen votes his way. Muguna on the other hand scored twice and created two assists when K'Ogalo thrashed Tusker in the opening day of the season.

His efforts fell short of Makwata's vote haul by the lowest integer. Gor Mahia only played twice in the league leaving Muguna and the club’s other nominee Boniface Omondi disadvantaged. The third finalist Ochan played a key role in Ingwe keeping three clean sheets. The Ugandan goalkeeper made crucial saves that propped him in the running for the season's first accolade.

With the burden of scoring at the national team rested on Michael Olunga, Makwata hopes to make his return to Harambee Stars and relieve the lanky Kashiwa Reysol striker some burden. "My target is to score more goals and hopefully reach twenty or even surpass come end of the season. I also want to make a comeback to the national team and help out because i know i can. With my current form i can do so much," he said

Makwata, a previous recipient of the gong while shooting for Ulinzi Stars took home a 49 inch television set courtesy of LG. The monetary incentive previously enjoyed by winners is lacking since the withdrawal of Sportpesa as title sponsor.

SJAK is in the process of looking for alternative sponsorship to take up the financial bit and restore the award to its original make up. Previously, winners would pocket Sh100000 with the rest of the squad sharing a similar amount.