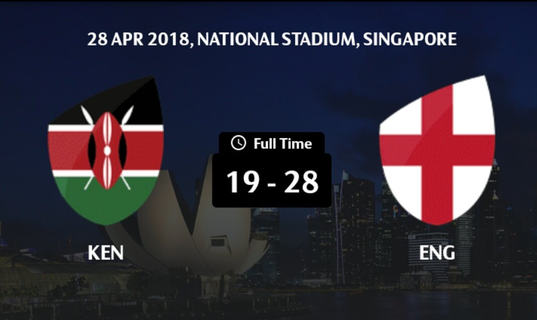 Kenya 7s began the Singapore 7s campaign on a low after losing 28-19 to England 7s in their first pool match at the National Stadium, Singapore

Shujaa began their Singapore Sevens campaign on the wrong footing after going down to England 7s in their first Pool B match at the National Stadium on Saturday morning.

Collins Injera struck for Kenya in the first minute for a 5-0 lead but England replied through Dan Norton's  brace that gave them a  14-5 half time lead.

The English men got two more tries in the second half to set up a mountain for Kenya 7s to climb.

Willy Ambaka reduced the deficit with a try well converted by  Edin Agero. Nick Oyoo also found space to hit another try but it was a little too late as England went on to win 28-19.

Shujaa's next pool match is against France 7s  at 11:18am before winding up group matches against USA at 2:44pm Kenyan time.