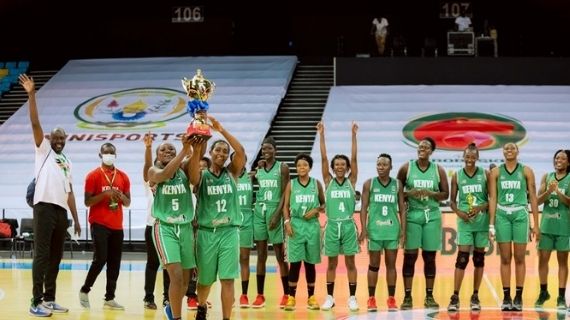 To do so, the likes of Natalie Akinyi, Victoria Reynolds, Mercy Wanyama and co will have to get out of a pool that includes Cameroon and Cape Verde.

Playing out of Pool A at the upcoming FIBA Women's AfroBasket championsip in Yaounde, Kenya's Lionesses will be keen to emerge unscathed from the pool stages, quarterfinal qualification on their minds.

To do so, the likes of Natalie Akinyi, Victoria Reynolds, Mercy Wanyama and co will have to get out of a pool that includes Cameroon and Cape Verde.

Kenya went to Maputo, Mozambique in 1985 for their maiden AfroBasket women championships where they never won single game. They went down hard losing by over century points 150-45 to DR Congo and 103-69 to Cameroon.

But the tide changed swiftly in the next championship in Dakar, Senegal in 1993. Kenya made a first podium finish a feat that earned them a slot in the World Championship in Australia in 1994.

A charged Kenya side went all the way to the finals where they went down  89-43 to Senegal. Despite the loss, they earned a World Cup ticket and was proudly the only Africa team in that championship.

The came Nairobi in 1997. Lionesses did well and only missed a bronze medal when they fell 90-62 to Nigeria. It was from this championship at home that things started to go on a downward slide for Kenya.

In 2007 in Dakar, there was nothing to honk about. Kenya were last and even lost 69-58 to lowly Madagascar. Another appearance in Maputo in 2013 was not good either as they were 10th.

In their last AfroBasket appearance also held in Dakar in 2019, a ten man Kenya team failed to win a single game and thus missed out on the Quarter-Finals slot.