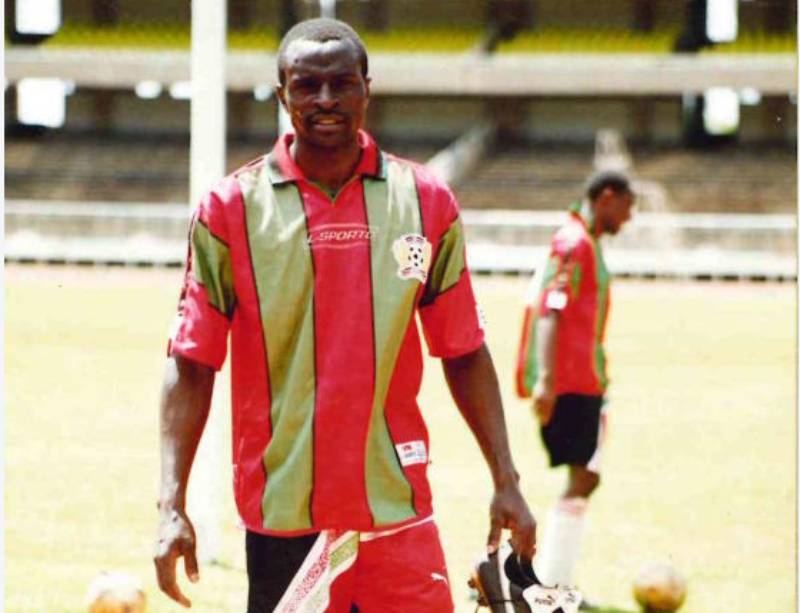 Mike Okoth Origi (born 16 November 1967) is a goalkeeper turned striker who went on to represent the national team, The Harambee Stars and played professionally in Oman and Belgium. His foray in Belgium was the first by a Kenyan footballer in Europe.

Okoth was in goal as Itierio High School defeated Kakamega High School on post match penalties to win the 1987 National Secondary Schools title. Some of his team mates at Itierio included Henry Motego and the late Henry Nyandoro who also turned out for Shabana FC, who were then in the Kenyan top tier league competition.

He was part of the Shabana side that represented Kenya in the 1988 Africa Cup of Champions Cup (today’s CAF Champions League). The team won their first round first leg fixture against Zambia’s Kabwe Warriors 1-0 at the Gusii Stadium in Kisii before losing 1-4 in the return leg in Kitwe two weeks later. He joined Kenya Breweries (now Tusker FC) the same year and later moved outfield, playing as a striker, a prolific one for that matter.

Okoth got a first whiff of national team action when he was selected to the Harambee Stars “B” team for the 1989 CECAFA Challenge Cup hosted in Kenya. He then made Mohamed Kheri’s squad to the 1990 African Cup of Nations in Algeria. His fortunes continued to rise with a move to Omani club Al Boshar in 1991.

He was again part of the squad as Harambee Stars returned to the 1992 African Cup of Nations in Senegal, where his performances saw him secure a move to Belgian second division club K.V Oostende. He would then move to Belgian top tier sides Harelbeke and RC Genk, winning the 1998/99 Belgian Jupiter League and the 1999/00 Belgian Cup.

In November 2003, Harambee Stars Coach Jacob Mulee recalled the 35 year old Okoth to the national team for the 2004 African Cup of Nations. In justifying Okoth’s call up, Mulee said, “Mike is like old wine in a new bottle. Look at his current form,” Mulee argued, further praising him for his discipline, which he said was responsible for his long career in Belgian football.

Okoth would play in his third and final AFCON in 2004 aged 36, before calling time on his international career. He would retire from active soccer in 2006 after a stint at KSK Tongeren.

Okoth is the father of Liverpool and Belgian striker Divock Origi and the uncle of former Kenya international keeper Arnold Origi. His elder brother Austin Oduor was also a Kenyan international who captained Gor Mahia to the 1987 Africa Cup Winners Cup title while his other brothers Gerald and Anthony played their football at Kenya Breweries FC ( today’s Tusker FC).