Late goal earns Rwanda U20 draw with Kenya U20 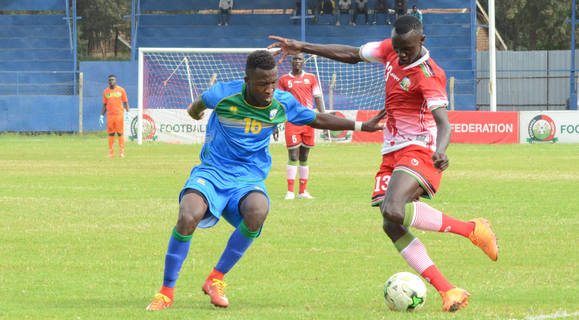 Action between Kenya and Rwanda

Kenya's Under 20 side, Rising Stars, conceded a late goal to draw with  Rwanda's  U20 side, Junior Wasps 1-1 in a 2019 Under-20 Africa Cup of Nations first leg qualifier match played at Kenyatta Stadium in Machakos on Sunday.

Byiringiro’s goal cancelled out Richard Odada’s seventh minute goal in a game that Kenya struggled to assert their authority in home ground, with minimal scoring chances.

Odada broke the deadlock in the seventh minute when he picked up the ball after Rwanda failed to clear a low freekick from captain Alpha Onyango, taking his time before calmly slotting past the Rwandese keeper.

From then though, there were minimal scoring chances with Rwanda taking time to keep possession passing the ball around the field well, but couldn’t create any scoring chances. Kenya on the other hand were slow to get into attack whenever they won possession.

The next half chance that came their way was four minutes to the break when skipper Onyango shot from ranger, but the ball went high over the bar.

It was more or less of the same story in the second period with kenya having a chance three minutes into the restart. Sidney Lokale picked up a long ball inside the box but his shot on the turn under pressure from a defender was weak.

A minute later, the Kariobangi Sharks forward rounded the keeper on the right and managed a shot from a tight angle, but a covering Prince Buregeya swept the ball off the line. Vincent Wasambo also had a go at goal with a shot from the edge of the box but it went wide.

Musa Masika, younger brother to Harambee Stars winger Ayub Masika had struggled to make an impact in the game and he was hauled off for Erick Ng’eno though he seemed to have picked up an injury.

But the Rwandese were the more attacking side and they came close with Christian Ishimwe’s curling effort from a freekick in the 72nd minute missing the target by a whisker.  Byiringiro then forced a fine save off the Kenyan keeper at his near post after skipping away from his markers on the right before shooting at goal.

The resilience however paid off with just two minutes of regular time to play when from a counter attack, the winger rounded the keeper to slot home.

This was the first match for redeployed Harambee Stars coach Stanley Okumbi  with the Rising Stars.