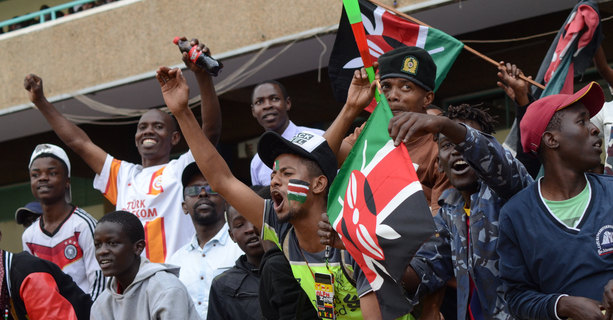 A total of 17,806 fans paid to attend Harambee Stars’ 1-0 win over Ghana in a 2019 African Cup of Nations qualifier at the Moi Sports Centre In Kasarani on Saturday, Football Kenya Federation has revealed.

The Federation on Monday afternoon published the collections from the game, pointing out a total of Sh3,873,600 was raised from the ticket sales. A toital of 50,000 tickets were printed for the game.

Regular tickets which were retailing at Sh200 and 16,798 of them were sold while only 514 VIP tickets were sold with each having retailed at Sh1,000.

Meanwhile, FKF boss Nick Mwendwa announced the federation had slashed charges for tomorrow’s friendly against Malawi by half as a way of thanking fans for turning out against Ghana.

“The fans were there for the team supporting us and as a federation we want to thank them for coming. They should come in numbers again on Tuesday as we continue to push our team forward,” Mwendwa said.

The Federation gifted Harambee Stars two million shillings for the famous 1-0 over the much fancied Ghana's Black Stars.