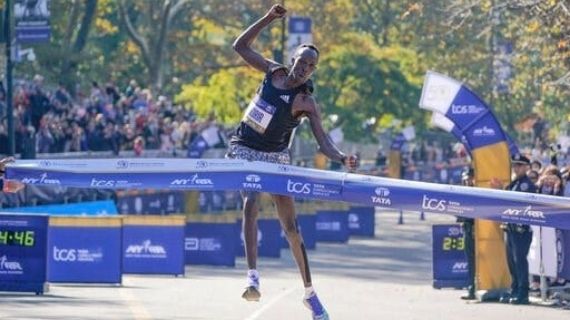 Korir overtook Morocco’s Mohamed El Aaraby and Italy’s Eyob Faniel around the 18th mile and quickly took out any drama. He won in 2:08:22.

Korir overtook Morocco’s Mohamed El Aaraby and Italy’s Eyob Faniel around the 18th mile and quickly took out any drama. He won in 2:08:22.

It was Korir's first victory in one of the World Marathon Majors and his first time atop any podium since winning the Ottawa Race Weekend Marathon in 2019. The 27-year-old Korir finished second to Geoffrey Kamworor in 2019 by 23 seconds and didn't race again until this June because of the pandemic.

El Aaraby held on for an improbable second-place finish after coming in 11th at the Tokyo Olympics. Faniel was third.

Jepchirchir was side by side with countrywoman Viola Cheptoo and Ethiopia's Ababel Yeshaneh from the time they entered the Bronx until they got to Central Park's entrance.

Moments after guzzling two energy gel packets, Jepchirchir turned on the jets and pulled away, winning in 2:22:39 for the third fastest time by a woman in NYC Marathon history.

“It's not easy,” she said of the New York course. “Toward the finishing line, I felt something I’ve never felt before to finish a marathon.”

Jepchirchir, 28, took gold at the Tokyo Olympics marathon in August and came back on a short recovery to win a race once dominated by her hero Mary Keitany, a four-time winner in New York who recently retired from the sport.

Cheptoo finished second in her marathon debut and quickly found her brother, Bernard Lagat, who was broadcasting the race on ESPN. Yeshaneh was third.