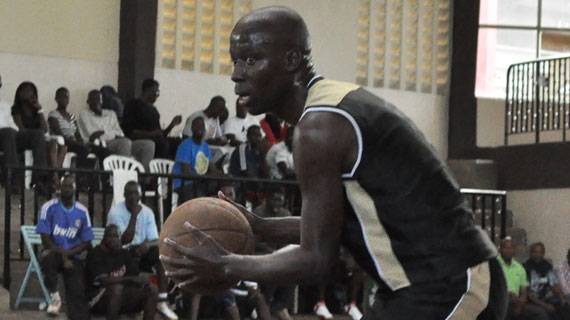 A basketball team consists of five players per side and is divided into different positions. Like most sports the team has very clear roles to support their overall success:

Action from the Kenyan Basketball league

Basketball is played by two teams of five players, with the aim of shooting a ball through the opposing team’s hoop, which is positioned ten feet above the ground.

Basketball brings together a combination of speed, skill, agility, balance, and tactics. The game is contested by two teams of five players and involves one team invading another team's territory, with the aim of shooting a basketball successfully through their opponent's hoop.

Basketball is different to most invasion games as, in some versions in North America, it utilises a shot clock to force teams to shoot within 24 seconds of gaining possession. This makes basketball action-packed and very enjoyable for spectators.

Unlike most invasion sports, the origins of basketball can be clearly traced to Dr James Naismith. In 1891 the physical education teacher was asked to create an indoor game for energetic students.

The very first game did not have the equipment of today. In fact it used a soccer ball and two peach baskets nailed 10 ft high. Originally the baskets did not have the bottom removed and required a pole to push the ball out each time a team scored.

However, the game has been a resounding success with both children and adults competing ever since its inception

Although the court has no definite size, the inner markings are very precise:

A basketball team consists of five players per side and is divided into different positions. Like most sports the team has very clear roles to support their overall success:

In a game of basketball there are three clear ways to score points.

During a competitive game of basketball there are two referees, a scorekeeper, timekeeper and a shot clock operator. To ensure that everybody is aware of a decision made, the referees perform a series of hand and arm signals.