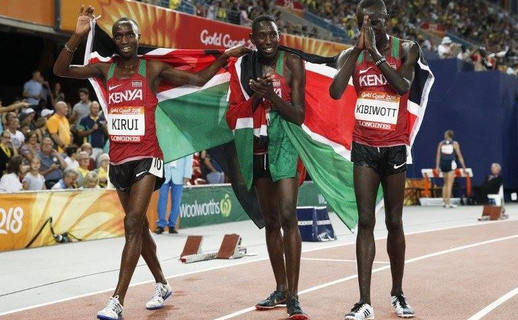 World and Olympic champion Conseslus Kipruto added another feather to his already decorated cap, leading a Kenyan podium sweep of the 3,000m steeplechase at the Commonwealth Games in Gold Coast, Australia on Friday.

Kipruto ran a scintillating race, setting a new games record of 8:10.08 while Abraham Kibiwott came in second timing 8:10.62 and world junior champion Amos Kirui just but managed to come in third in a time of 8:12.24.

Kirui seemed to have faded off in the final lap, but he gathered enough energy in the final 100m to pip Canadian Mathew Hughes and ensure Kenya keeps its history of sweeping the podium in the water and barrier race.

It was a show of superb leadership from Kipruto as he constantly ensured his two compatriots were in the vicinity. He took charge of the first four laps of the race before Kibiwott temporarily took charge up until the bell.

Kipruto bolted forward and anytime he saw his mates falling off, he slowed down to push them through. After the final water hurdle, Kibiwott seemed to have finished off his energy, but Kipruto cheered him on, signaling him to move to the inside of the lane while he took the outside, blocking the Canadian.

The two went on till the final 30m when Kipruto dashed for gold when it was clear the top two medals were safe. Behind them, Kirui was putting up an immense shift as he came from way back to catch up with Hughes and go for bronze.

The Canadians effort to dive on the line was in futility as Kirui had already beaten him to it.

l three Kenyans sailed to the finals of the 1500m while the 4x400m team also earned a berth at Saturday’s final. Cheruiyot clocked 3:42.95 while Manangoi clocked 3:46.82 both winning their heats. Taki finished third in his heat but still managed to earn an automatic qualification slot after clocking 3:43.93.

The Kenyan 4x400m team also progressed to the final after finishing second in the heats, clocking 3:13.52 behind winners Botswana who timed 3:05.01.

The upset of the day however was when reigning champion Julius Yego failed to progress to the final of the javelin throw. His distance of 74.55m wasn’t enough but compatriot Alex Kiprotich just managed to make it with a best throw of 74.88m.