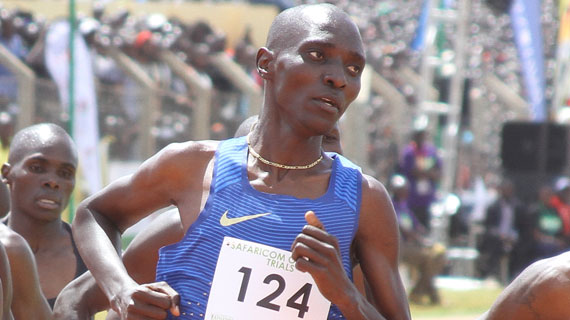 Former Olympic and World 1500m champion Asbel Kiprop on Tuesday met with the Inspector General of the National Police Service Hillary Mutyambai after a cryptic tweet over the weekend sent shockwaves across the interwebs.

Kiprop who was last week convicted of a doping offence and banned for four years by the IAAF laid out a series of tweets maintaining his innocence and one that shook the entire Nation was when he asked the Police Service where he serves as a Chief Inspector to come for their machinery 'or he will use them to get Justice for himself'.

According to sources, Kiprop was immediately taken up by the Police and brought in to Nairobi and on Tuesday met with his boss.

"The police told us that they have taken up the issue and will deal with it. As AK, there is nothing much we can do now. Let the police do their work because he is their man. But if needed, we will be here to help," a senior official at AK told MichezoAfrika.

"Asbel Kiprop is our hero and we will celebrate him," the official Police Service Twitter handle posted.

There have been fears that Kiprop was sinking into depression after his case was first mentioned and his tweets have been showing a man desperate for help.