Kipkemboi, Manangoi through to 1500m World U18 Final 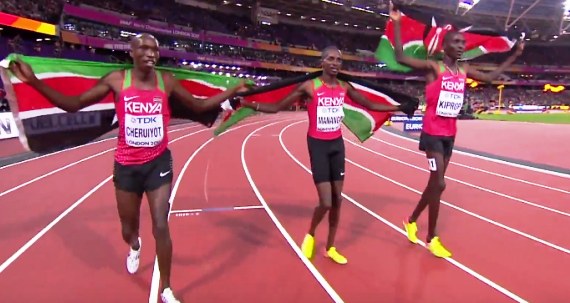 Kipkemboi, Manangoi through to 1500m World U18 Final

The last edition of the IAAF World U18 Championship kicked off at the new look Kasarani Stadium, Nairobi on Wednesday morning.

The first Kenyan athlete in action was Elijah Onkware Matayo who clocked 10.78 in the 100m boys  heat to qualify for the semi-final set for afternoon. The 100m final will be the second last for Day 1 of the championship.

The Kenyan fans got a better feel of what to expect during  the 1500m heats.

A dominant Dominic Kipkemboi clocked 3:48.77 to win Heat 1 after leading the race throughout but appeared to have picked an injury in the last 50 meters.

In the second heat, George Meitamei Manangoi comfortably won the heat in 3.55.00  to qualify for the final, leaving the crowd in cloud nine.

Mary Moraa stunned the crown with a new 54:07 personal best to win her  heat  in 400m Girls

President Uhuru Kenyatta will be the guest of honor during the official opening ceremony set for 4pm Kenyan time.

Noah Kiprono and Japhet Kibiwott will be in action in the 800m Heats at 5:40pm Kenyan time.The full Day 1 timetable is available here

Beatrice Chebet and Emmaculate Chebet are strong contenders for Gold in the 3000m girls final that kicks off at 7:40pm Kenyan time.

Fans who wish to watch the historic action live  can purchase tickets online via http://buytickets.wu18nairobi2017.com/

For those who opt to use MPESA, the instructions are as follows;

Then follow the prompts where they will provide details such as name, type of ticket they want and number of tickets among other details.

An SMS will then be sent with instructions on how to make the payments.

Once payment is done using MPESA, Airtel Money or Eazzy Pay, A ticket number(s) is generated and sent to their phone.

Visitors will then present the ticket numbers for validation at the venue entrance during the competitions and get physical tickets.