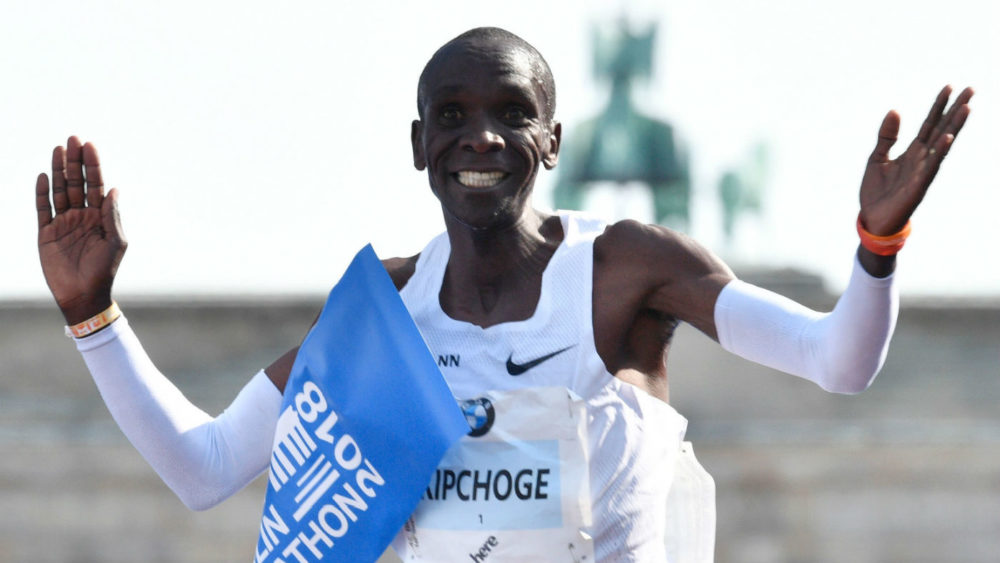 Not only is this race important to Kipchoge’s lead-up to the Olympics, but it’s also a special one for him because it’s the same race where he started his career eight years ago. In April 2013, Kipchoge completed the 42.2K distance for the first time in Hamburg, taking the win in 2:05:30 and cementing his arrival as a champion of the distance.

After his shocking defeat in last year’s elite-only London Marathon, Eliud Kipchoge is looking to reclaim his status as the man to beat when he toes the line at the Hamburg Marathon on April 11.

The Olympic champion and world record holder at the distance, Kipchoge saw his 10-marathon winning streak end last October in London, and while other athletes at this elite-only event will be looking to run an Olympic-qualifying time, Kipchoge is looking for redemption.

“My number one goal is to run a beautiful race in Hamburg. A beautiful race will give people hope. It is another step that we are on the right track to normality,” he tweeted.

Kipchoge finished a disappointing eighth place at the London Marathon last year in 2:06:49, his first defeat at the distance in seven years. Of course, his world record time of 2:01:39 from the 2018 Berlin Marathon still stands, and he is still the only person who has run under two hours in the distance, which he did as a part of the INEOS 1:59 Challenge, stopping the clock at 1:59:40. He has also won an incredible 11 out of 13 marathons since his debut at the distance in 2013.

Not only is this race important to Kipchoge’s lead-up to the Olympics, but it’s also a special one for him because it’s the same race where he started his career eight years ago. In April 2013, Kipchoge completed the 42.2K distance for the first time in Hamburg, taking the win in 2:05:30 and cementing his arrival as a champion of the distance.

Kipchoge told the NN Running Team that since it was his first marathon, this race holds a lot of memories for him. He recalled not knowing what was going to happen in the later stages of the race, and wondering if he would “hit the wall.”

“Winning there gave me confidence that I could run the marathon and it played a big role in my career,” he explained. “Now I’m running Hamburg again in a very different situation. We have very few races globally and it is a good opportunity to test myself, run well and offer hope to the world.”

Kipchoge also spoke about how the pandemic has changed things for him, and he said that it was difficult to train while being forced to stay within his compound for several months because of movement restrictions implemented by the Kenyan government. He has now been able to resume training with the team, but they are taking precautions to ensure that everyone stays healthy. He added that while the last year has been hard, he thinks we are “on the right track to a brighter future.”

“Life cannot stop, it does not stop for a single second,” he explained. “But what everyone should know is, the pandemic is just one of life’s challenges. Marathons are just like life, there are ups and downs every kilometre. Every mile there is a challenge. We should all be prepared to accommodate challenges in life but above all enjoy and embrace the challenges.”

Leave it to the fastest marathoner in the world to give us the pep talk we all needed. The running world will be eagerly waiting to see what Kipchoge does on April 11, and his fans will be cheering him on from every corner of the globe.