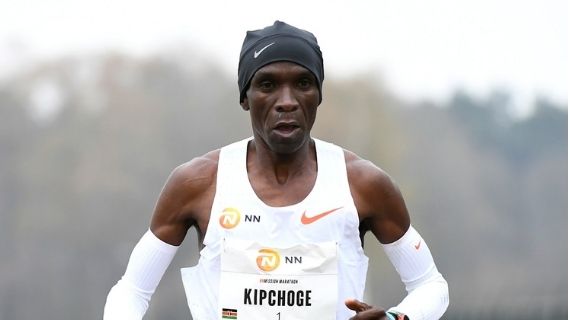 In the end, nobody could live with the pace set by Kipchoge as he made a winning return to racing, six months after his eighth-place finish at the 2020 London marathon.

Eliud Kipchoge turned on the style with a dominant win at the NN Mission Marathon in Enschede, Netherlands. The Kenyan world record holder was out in a race of his own after the challenge of compatriot Jonathan Korir ended with half an hour left to run. Kipchoge looked in fine fettle, as a group of around 70 runners raced around an improvised lopped course at Twente Airport.

Kipchoge's marathon time of 2:04:30 was almost three minutes off his world best of 2:01:39, set at the Berlin Marathon in 2018. However, victory in a race the athlete described as "crucial" to his preparations for Tokyo 2020, represented a timely demonstration of his form, with greater challenges lying ahead at the Olympics in August.

Early on, a group of four runners including two pacemakers broke from rest of the field, with Jonathan Korir – a neighbour of Kiphoge who grew up just three km away from his home village in Kenya – joining the world record holder at the front of the pack. Kipchoge's pace through 10km was 29:15, with the second five km run in 14:21.

The pace continued to rise through 15km, with the front runners passing through in 43:46. At the half-marathon mark, Kipchoge and Korir set a time of 1:01:43, as the first of the two pacemakers dropped out of the race. It left only three athletes (including one pacemaker) out alone for the second half of the race, with the second group of athletes over a minute behind.

As the clock reached 1 hour and 20 minutes and the pace dropping slightly, Kipchoge took control of proceedings, moving to the front of the group as the pacemaker dropped to third.

The final 10km saw Kipchoge lead from the front, as he sought to push the pace and test his form with a little over three months left until the Opening Ceremony of the Tokyo 2020 Olympic Games.

At 1 hour and 35 minutes, the challenge of Jonathan Korir finally faded as he dropped away from the front. It left Kipchoge to kick for the finish alone with just a single lap of the circuit left to run.

In the end, nobody could live with the pace set by Kipchoge as he made a winning return to racing, six months after his eighth-place finish at the 2020 London marathon.

The race took place at Twente Airport in Enschede, the Netherlands after COVID-19 restrictions caused a relocation from Hamburg, Germany. It resulted in a unique race environment with an almost completely flat looped course along the airport runways and temperatures as low as 4° Celsius (39° Fahrenheit).

The marathon course for the Tokyo 2020 Olympics will be markedly different, with a large half-marathon-length loop followed by two laps of a 10km loop. The weather in Japan is also set to be a factor, with average temperatures as high as 26° Celsius (78.8° Fahrenheit)

Kipchoge has become a legend of marathon running, setting the current world record of 2:01:39 at the Berlin Marathon in 2018. A year later he went on to become the only person to have ever to break the sub-two-hour marathon mark, when he ran 1:59:40 at the 2019 Ineos Challenge. Although the conditions of that challenge mean it is not an official world record, Kipchoge's marathon pace that day saw him average 2:50 min/km over the entirety of the 42kms.

Kipchoge is also the reigning Rio 2016 Olympic champion, having won the race in 2:08:44 to clinch the gold medal. Now with Tokyo 2020 less than 100 days away, the Kenyan athlete will return to his training camp in Kaptagat, Kenya to prepare for the event.

Last Friday, Kipchoge talked to Tokyo 2020 about his motivation for running at the Olympics, saying: "What I am actually aiming for is to win and inspire the world. The number one factor is the inspiration, for the youth in the world to get inspired and to love running. That’s why I’m still running.”