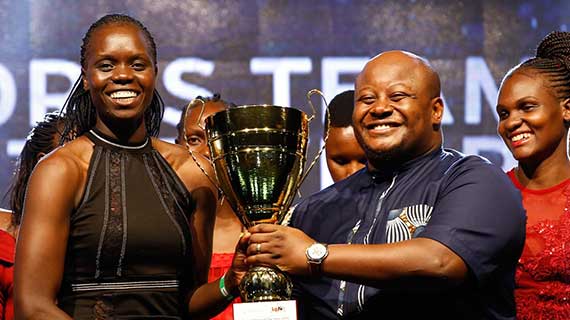 Eliud Kipchoge’s record setting run at the Ineos 1:59 challenge in Vienna last year has continued hoisting him into more accolades after being named the 2019 Sports Personality of the Year for a second time in Mombasa on Friday night.

Kipchoge who was also named male sportsperson of the year became the first man to run a marathon in under two hours, adding that to his earlier conquest at the London Marathon in April.

“Sports is the only way to unite the country and unite the whole world. My goal is to make running a lifestyle event. When you run you become healthy. Sports brings unity and with unity comes peace. Sports is where freedom is,” Kipchoge, in his usual philosophical notes stated as he received the trophy from Sports Cabinet Secretary Ambassador Amina Mohammed.

In the team sports category, Malkia Strikers were named team of the year after retaining the Africa Games and qualifying to the Olympics while head coach Paul Bitok earned coach of the year title over the same achievements.

The Kenya Lionesses who reached the final of the African Cup and earned an Olympics ticket as well were second with Harambee Starlets, CECAFA Women’s Challenge Cup champions coming third.

KCB earned the team of the year accolade for their success in winning the national 15s and 7s titles while the Kenya Morans who reached the final of the FIBA Afrocan last year were second, FKF Shield champions Bandari coming third.

Sports Personality of the Year:

Sportsman of the Year;

Sportswoman of the Year;

Coach of the Year;

Sports Team of the Year men;

Sports Team of the Year women;

Federation of the Year;

School coach of the year:

School team of the year (Boys)

School team of the year (Girls)