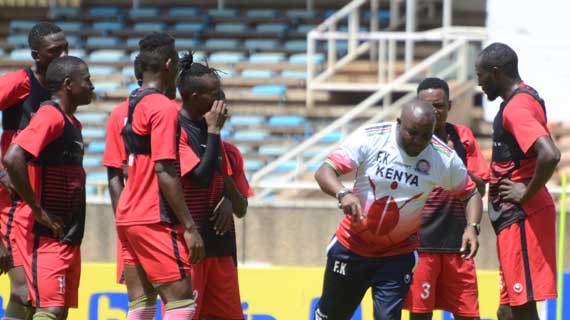 The national under-23 soccer team will face Sudan in the return leg of their African Under-23 Cup of Nations qualification tie in Nairobi on Tuesday with Kenya looking to overturn a 2-0 deficit to progress to the next round.

The winner of the tie faces Nigeria in the final qualification stage with the West Africans having pulled off an escape too, overturning a 2-0 defeat against Libya in the first leg to win 4-0 at home on Monday evening.

Emerging Stars' coach Francis Kimanzi is confident that with a better performance compared to the first leg, they can get a result that takes them to the next round.

“If we can play better offensively and create more opportunities, we will have a good chance. If we can get the first goal early, then we can run the game from there. I am confident enough to say there is a possibility,” coach Francis Kimanzi said after Tuesday afternoon’s session at the Kasarani Stadium.

Kenya needs to win the game by a margin of three clear goals to progress. They lost the first leg courtesy of a goalkeeping howler from Brian Bwire and a soft penalty given to the hosts in the second half.

Skipper Mike Kibwage says they were unlucky in the first leg and has vowed to lead his mates to victory on Tuesday.

“We were unlucky in the first leg because even though we were playing away from home, we created the most scoring chances but we could not score. We are confident of turning things around in the return leg,” Kibwage said.

Forwards John Avire and Jaffaru Owitoi are doubtful for the tie after picking up injuries in the first leg and trained on their own on Monday afternoon.

Kimanzi has however called in Mathare United’s James Kinyanjui while striker Piston Mutamba joined the team straight after arriving from Ghana with the senior team.

The match will be played at 4pm