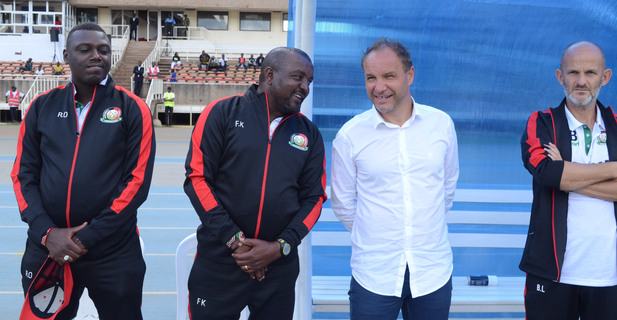 Harambee Stars face Sudan in the first leg of the Africa Under-23 Cup of Nations qualifier in Khartoum on Wednesday night.

Harambee Stars Under-23 head coach Francis Kimanzi is confident the team will pick up positive results when they face Sudan in the first leg of the Africa Under-23 Cup of Nations qualifier in Khartoum on Wednesday night.

Kimanzi’s charges arrived in Sudan on Sunday night ahead of the tie and Kimanzi will be looking to avoid defeat and score an away goal before the return leg next week in Nairobi.

“It is another challenge and we expect a good result because last time we tried and got some good results against Mauritius. This time we are lucky because we have almost the same group that did the job in the first game and that gives us a slight advantage,” Kimanzi said as the team left on Sunday.

The tactician however admits he expects a tough duel in Khartoum, but believes the team’s preparations as well as the fact that most of his squad members are regulars in their respective teams will give them an edge.

Kimanzi has included three foreign based stars in his final squad that travelled. Georgia based Alwyn Tera who missed the first round of qualification against Mauritius has been included in the travelling party.

He is joined by skipper Joseph Okumu who plays in the USA and Sweden based Ovellah Ochieng.

The winner of this tie qualifies for the third round of qualification to play either Nigeria or Libya with the eventual winner qualifying for the final tournament in Egypt. The eight-nation championship in North Africa will consequently be used as a qualifier for next year’s Olympic Games in Tokyo, Japan.