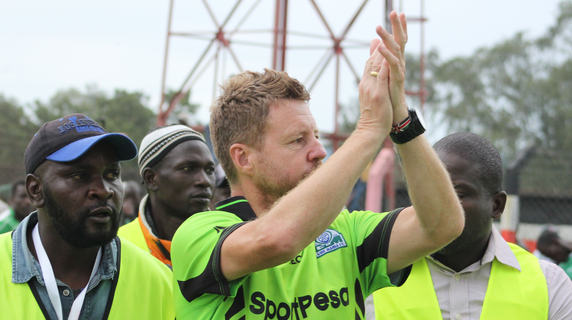 Gor Mahia head coach Dylan Kerr has admitted it will not be a walk in the park against Bandari FC in Mombasa on Tuesday afternoon, noting the dockers are in good form and will be a tough nut to crack.

Gor saw their 10-match winning streak put to a halt over the weekend against Nakumatt in Machakos and Kerr is wary that Bandari will also want to do the same.

“Teams will be looking at us and thinking, hold on, they are beatable. They have more confidence now and we need to be aware of that. Matches will get tougher at this stage of the season but we need to maintain our focus and work ethic,” the tactician noted.

Gor will look to increase their lead on top of the standings to 16 points as they currently lead with 56 points with their closest chasers Sofapaka being second with 43.

“We need to get to a healthy gap and winning will be great for us. Bandari are a tough side looking at their form and it will be tougher playing on that pitch because we have played there already in a Cup competition and it was tough,” the tactician added.

He will be boosted with up to five of his key players available for selection after recovering from illness. Humphrey Mieno, Godfrey Walusimbi, Boniface Oluoch, George Odhiambo and Jack Tuyisenge will all be ready for the tie.

However, Kerr says he has to be especially careful with his selection especially noting they have two crucial CAF Confederations Cup matches at home to Rayon Sport and away to USM Alger. He is particularly concerned with his lead striker Tuyisenge who is still nursing an ankle knock.

“We have to make balances. We have a crazy schedule this month and we have to ensure everyone is fresh and everyone is injury free. We hope that we stay that way. It’s tough but we have to believe,” the tactician added.

Bandari are unbeaten in their last five matches, winning three and drawing two. Their last two matches were 3-0 and 3-1 wins over Kariobangi Sharks and Posta Rangers at home and away respectively. They have only lost twice at home this season.

The first leg meeting between the two sides ended 2-0 in favor of K’Ogalo at the Kenyatta Stadium in Machakos.