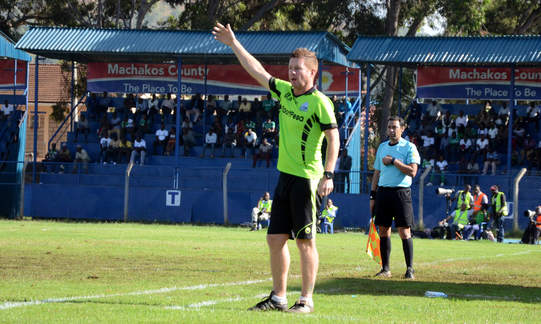 Kerr challenges his charges to finish the league on a high

Gor Mahia head coach Dylan kerr is hoping his side bounces back to winning ways on Thursday when they host Zoo Kericho at the Kenyatta Stadium in Machakos. Gor have been on a run of four winless matches losing three and drawing one.

The tactician has challenged his side to show him they truly want to remain in the team by giving a good performance to finish the season on a high.

“The players are now playing for their futures at Gor Mahia. Go to the pitch and show me you want to remain in the team. We have the Everton match coming up and these two last games of the season are to show me who wants to play against Everton and who doesn’t,” Kerr noted.

Gor lost against Thika United, Ulinzi Stars and Vihiga United on the backdrop of player revolt that led to a strike due to unpaid salaries while last weekend on their coronation day they lost a 2-0 lead to draw 2-2 with Mathare United in Kisumu.

“Zoo is a strong team and we expect a very tough match. We should really take them very carefully and work hard to win that game,” the coach further stated.

He has been boosted with the availability of utility player Philemon Otieno who has been out for the last three weeks with an ankle injury.