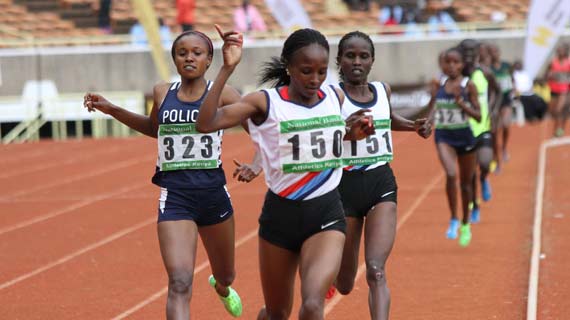 Obiri, also the world cross country holder, clocked 14:22.12 which was not only the winning time but also a meeting record and the world lead.

Kenyan athletes returned to the world track with a thunderous thud winning three races at the Monaco Diamond League on Friday night.

Obiri, also the world cross country holder, clocked 14:22.12 which was not only the winning time but also a meeting record and the world lead.

The military girl bolted off to lead the star-studded field from bell to tape. At the 3,000m mark, competition was reduced to four where Ethiopian Letesenbet Gidey trailed Obiri as Laura Weightman and Sifan Hassan maintained the chase.

However, with 1,000m to go, the leading park shrunk as Ethiopian-born Dutch runner Hassan fell off the race. The Kenyan staged a blistering sprint in the last 250m to deliver the win. Gidey timed 14:26.57 to settle for the second place, whereas Briton Weightman was third in 14:35.44.

It was a sweet revenge for Cheruiyot to the Ingebrigtsen brothers who beat him and team Kenya in the ‘The Impossible Games’ virtual race in June. Despite being the race favourite, Cheruiyot was well aware of the threat posed by the European champion 19-year-old Jakob Ingebrigtsen (Norway).

Cheruiyot maintained the lead, weary of the teenager touted to be the next big thing in the distance to time 3:28.45 for the pole position, 0.04 shy of his personal best set in the same stadium.  The Norwegian athlete came home in 3:28.68 setting the European record as British Jake Wightman clocked 3:29.47 for the third place.

Competing in a less familiar 1,000m race, Kipyegon came very close to setting a world record- second of the night. She ran in the shadow of British Laura Muir for the better part of the race but closed in on the leader in the last 250m and outdid herself, winning in 2:29.15, 0.17 off the world record of 2:28.98.

European 1,500m champion Laura Muir led at the bell but Kipyegon put in an irresistible surge with 250m to go and won by almost two seconds from Muir who set a British record of 2:30.82.

World Under-20 3,000m steeplechase silver medallist Leonard Bett stopped his watch in 8:08.78 for the second position in his specialty. He trailed Soufianne El Bakkali the world bronze medallist who timed 8:08.04 to win.

World 800m bronze medallist Ferguson Rotich was eighth with a time of 1:45.48 in a race claimed by world champion Donavan Brazier in 1:43.15.