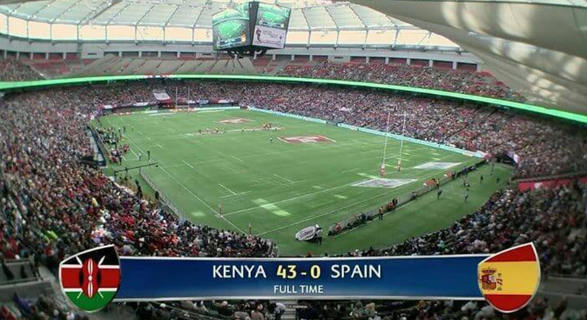 Kenya 7s sailed into to the Main Cup quarter after beating Spain and losing to Fiji to finish second in  Pool C of  the HSBC World Rugby Sevens at the BC Place Stadium, Vancouver, Canada.

Kenya had opened her account by beating France 14-7 in the first match before a performance to remember against Spain.

Bill Odhiambo, Oscar Ouma, Jeffrey Oluoch, Arthur Ochieng, Nelson Oyoo all scored a try while Willy Abaka scored twice to lead Kenya’s assault against Spain 7s who had no response. Sammy Oliech made one conversion while Eden Agero made three to hand Kenya a 43-0 win and guarantee them second place finish.

In the final Pool C match against Fiji, Kenya 7s narrowly lost 24-21 to Fiji 7s.Collins Injera who scored Kenya's first try made history by becoming the second man to hit 250 tries in the HSBC World Rugby Sevens Series. Agero and Oluoch scored the other tries for Kenya 7s with Oliech making a conversion and Agera two conversions but  they were not enough to dislodge the battle hardened Fiji who went on to top pool C.