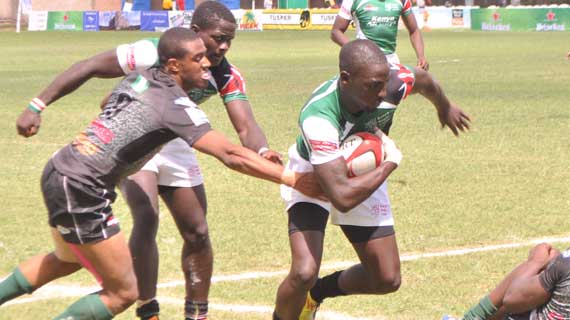 Sammy Oliech in action in previous match for Kenya.jpg

Shujaa reached the semifinals of the previous two editions of the tourney one in Dubai (2009) and the other in Russia (2013).

The men's rugby team are set to leave for the USA on Sunday morning to join a host of 23 nations in a new set up of the rugby World Cup, that involves a high-stakes knockout format to be played from July 20 to 22 at AT&T Park in San Francisco.

Innocent Simiyu expressed lots of confidence in his players and lauded them for their hard work in training while promising good performance.

” We have a very strong squad based on training. The guys have really trained hard and we believe we have selected the best team that can represent the country. We’re looking for good performances from the players and hopefully, we can get some good results,” said head coach Innocent Simiyu after unveiling the squad.

Simiyu also commented on the new look knockout format of the tournament saying that the team will need to adapt very quickly to settle down the early chaos in each game if they are to have any chance. Shujaa will be meeting Tonga in their opening game on Friday, July 20 at 11:01 pm EAT.

"It is an interesting format. This being a knockout it means that you have to adapt very fast to the chaos in the game because if the game goes it goes and you have to keep winning to stay in it. The first game versus Tonga will be very critical. We have to start very well, get our game going, hit our performance standards very early, get the results that we want and proceed from there,” said Simiyu.