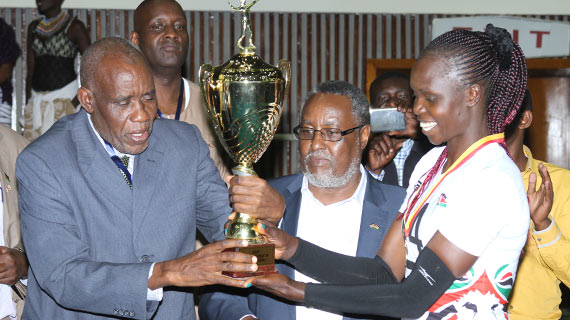 Kenya's Malkia strikers will head to the Africa Cup of Nations  with a stronger bid for their title defense following their remarkable performance during the regional Zone 5 qualifiers that saw them finish at the top of the standings with 100 percent win record.

The Kenyan girls edged Egypt with straight sets of (25:18, 25:17,25:17) on Sunday to conclude the three days championships at Nairobi's Kasarani arena without dropping a single set  having beaten all three teams Uganda Rwanda and Egypt with a 3-0 margin.

Egypt were quick off the blocks to open a four point gap in the opening proceedings of the match for an 8-5 lead at the first time out.

Trailing 8-13, Kenya staged a spirited come back to tie 13-13  with setter Janet Wanja's direct serve points and two crucial blocks by Trizah Atuka  and Everlyne Makuto bringing the hosts back into the match.

From here henceforth, Kenya took a two point lead for the first time with Makuto's three successive points from the Serve  stretching Kenya's  lead to 21-17.

The second set started in favor of the Egyptians who dominated opening action but Kenya took charge after the first technical time out to lead all the way to a 25-17 win.

The third set was equally competitive with the Egyptian attempting a possible comeback as they stretched Kenya only to get stuck at the 17 point mark as Kenya -powered by their noisy loyal home fans- picked the crucial win  that crowned them regional queens.

Kenya and Egypt will now head to Cameroon to represent the region in the chase for the slots  to the World Championships in Japan.