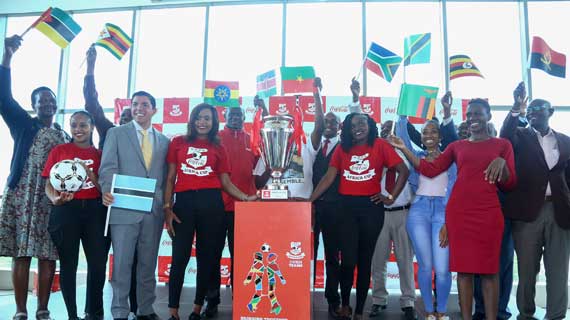 The second edition of the COPA Coca-Cola Africa Cup will be taking place this year in Thika, Kenya from the 2nd to 5th of December 2019

The second edition of the COPA Coca-Cola Africa Cup will be taking place this year in Thika, Kenya from the 2nd to 5th of December 2019.

The hosts and the inaugural champions, Kenya, will be seeking to retain the title they won last year at the games that were held in Nakuru, Kenya.

This year, the COPA Coca-Cola tournament was more than football in all participating schools across Africa. It sought to impact behavior change by introducing plastic collection as part of educating them on the importance of a cleaner environment by taking care of plastics disposal.

In Kenya, at least 92,057.50 kilogrammes was collected in the entire championship period with five schools achieving the highest numbers and winning the pitch refurbishment in their respective institutions. These are Mutuini High from Nairobi, St. Charles Lwanga Secondary School from the Coast, Mwiruti Mixed Secondary from the Rift and Mountain region, Bishop Okul Girls from the Nyanza region and finally Nyang'ori High School from the Western region.

In the Pan-African tournament, twelve (12) teams will compete against each other to determine who will be the Under-16 champion of Africa. The participating teams will include, Uganda, Tanzania, South Africa, Zambia, Zimbabwe, Botswana, Angola, Ethiopia, Mozambique, Burkina Faso, Namibia and the host country Kenya.