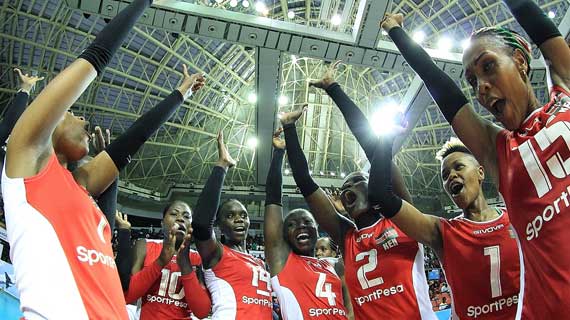 Africa Cup defending champions Kenya will face host nation Cameroon in the finals of the 2017 Africa Cup of Nations in Yaounde with Kenya seeking to retain the crown they last won in Nairobi in 2015.

Kenya qualified for the finals after a 3-0 win over North African side Egypt completing their revenge over a side that crashed their Olympic dreams in 2016.

Cameroon on the other hand had an easy cruise past Senegal in the second semi final winning with straight sets of 25-19, 25-20 and 27-25 to set up a gigantic battle against the East African side that now seeks her 10th crown.

The last time the two sides met was during the 2016 Olympic qualifiers where Kenya beat Cameroon 3-1 (25-22, 25-23, 20-25, 25-09) in group matches. Cameroon went ahead to beat Egypt in the finals and qualified to represent Africa at the Olympic Games in Rio Brazil.

Both teams, Kenya and Cameroon, have already qualified for the World Championships that will be held in Japan in 2018.