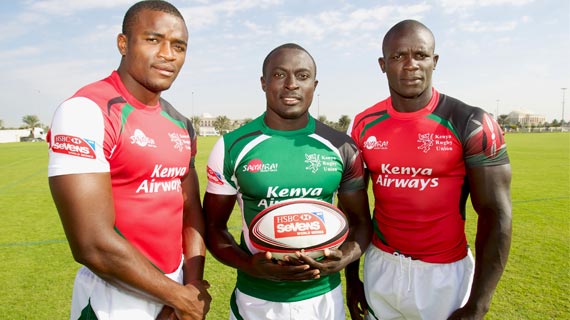 It was a mixed fortune for Kenya 7s  the  fifth round HSBC World Rugby Sevens Series at Sam Boyd Stadium , Las Vegas,Nevada  in as they beat Fiji in Pool A final match to progress in the Main Cup but fell to Argentina 17-14 in the quarter final.

Fiji were the first to strike as Jerry Tuwai made a key break, combined with Amenoni Nasilasila who found Paula Dranisinukula  and the latter had a simple task to make a try with Nasilasila adding the conversion.

Collins Injera levelled the proceedings at the break before delivering a try-scoring pass to Samuel Ngethe on the far left as Kenya capitalized on the one mad advantage after Vatemo Ravouvou was sent off for a high tackle.Injera missed the conversion.

Fiji were not done yet as  a lapse in concentration by Kenya allowed Jerry Tuwai  switch back inside to feed Naduva  who broke away for a try, Mesulame Kunavula added the conversion.

Andrew Omonde snatched a late victory for Kenya against Fiji, their second ever to send the Kenya fans into crowd nine.

In the quarter finals, Argentina took the lead through Conrad Roura who capitalized on a loose ball before Gastón Revola added the conversion  for a 7-0 lead.

Kenya evened out the score line through Nelson Oyoo who used his speed then Eden Agero converted successfully.

Argentina then squeezed another try that Will Ambaka responded to make it 12-12.

A mistake in the kick off  dented Kenya's hopes as it allowed Renzo Barbier make it 17-12 before the final whistle.

Kenya will now face Australia  at 11:50pm in the fifth place playoff.