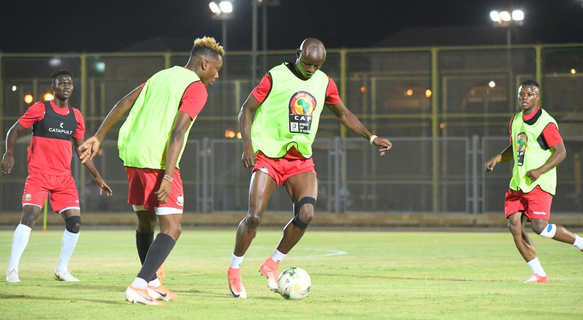 Kenya vs Algeria Match kicks off at 11:00pm Kenyan time

After a decade and a half absence, Kenya's Harambee Stars makes a return to Africa's Premier soccer extravaganza on Sunday evening with a Group C Africa Cup of Nations fixture against Dessert Foxes of Algeria at the 30 June Cairo Stadium.

The match kicks off at 11:00pm Kenyan time and will be live on KBC, Supersport 10 and BeIN Sports.

For the crunch tie, Kenya's coach Sebastian Migne has named a strong line-up for the match. Patrick Matasi retains his position between the sticks despite the howler against DR Congo in Harambee Stars last build-up match.

Captain Victor Wanyama will marshal the midfield where he has the company of pass master Francis Kahata with Eric Johanna and Dennis Odhiambo.

Japan based Micheal Olunga leads the quest for goals and should count on the great partnership from fast-footed Ayub Timbe.

Kenya will don the red Macron jersey in the opening Group C match against Algeria. Other teams in the group are Tanzania and Senegal