Kenya Morans through to Afrocan Final with win over Morocco 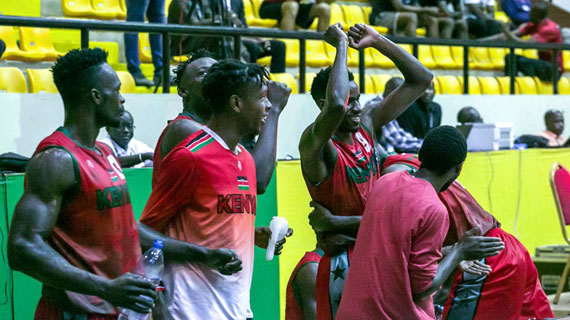 Eric Mutoro put up a man of the match performance picking a game high 32 points as Kenya progressed to the final of the FIBA Afrocan Championship with a 96-66 thrashing of Morocco in the semi finals in Mali on Thursday night.

The Morans, as the team is known  were in emphatic form having picked up pace since the tournament began and they took command of the game from the first whistle.

On top of the 32 amassed by man of the match Mutoro, Tyler Okari added on the joint-second highest individual score of the night, sinking in 20 points for the Morans while Tom Wamukota and Griffin Ligare picked eight each.

After Morocco tasted the net first, Kenya took charge leading 12-2 with Mutoro hitting two three pointers to contribute to the haul. The Morans went off the first quarter with a 27-11 lead.

At half time, the Morans were sailing comfortably and led 50-26, stretching it further to a 77-46 scoreline by the end of the third quarter.

In the final quarter, it turned up to be a training session for the Morans with the technical bench even having the comfort of resting all the star players including skipper Griffin Ligare, Okari and Mutoro.

The Kenyan side had overcome Tunisia in the quarter finals on Wednesday night  to qualify for the semis where they  ended the North African hopes of a possible top two finish.