Kenya Lionesses defeat Uganda to be crowned the Sevens Champions 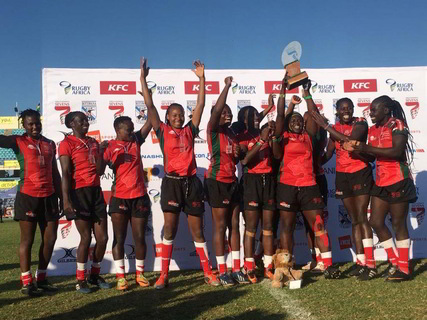 The Lionesses have been denied the crown four consecutive times by South Africa. It is a relief for the team to win the title for the very first time in the history of the tournament since its inception in 2006

The Kenya Women rugby team, commonly known as the Kenya Lionesses lifted their first Rugby Africa Women Sevens Cup title after they went past Uganda 29-7 in the final match of the tournament in Gaborone Botswana.

It was an easy sail for the Kenyan queens who had routed their Madagascar counterparts 27-0 during their semifinals en route to the deserved victory. double tries from Michelle Omondi and Janet Akello of the Lionesses ensured that they led at the break 22-0 moving them closer to the coveted crown.

Kenya has lost in the last four final consecutively to former defending champions South Africa who early in the year opted out of this year's edition to prepare for the upcoming Women's Rugby World Cup. Since its inception, South Africa have stamped their dominance on the title. The title has always been close to East Africa with Uganda coming close in three consecutive years 2006, 2007 and 2008 where South Africa beat Uganda on all the three counts. Uganda also was defeated by Tunisia in 2012, another year that South Africans did not participate.

The Kenya Lionesses journey has not been a lucky one after South Africa subjected them to four consecutive losses in the last four finals but it came as a relief for Lionesses coach Ken Wambua to finally land the trophy in their absence.

the Lionesses topped pool A of the tournament without defeat or conceding a single try, Seeing off Senegal 41-0 before giving Madagascar an almost similar score 42-0 to land into the knockout rounds. they proceed with they 'over 40' run into the last eight going past Zambia 41-7 before ending Madagascar run at the semi-final 27-0.