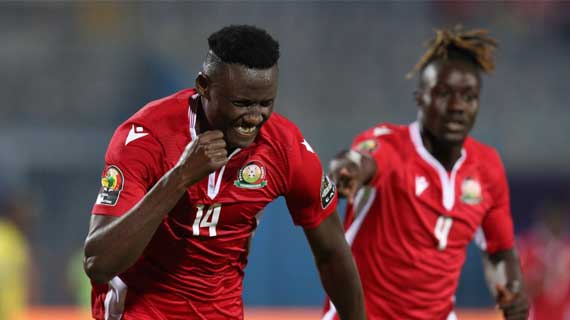 The victory saw Kenya retain hope of making it into the round of 16 as with just a point against Senegal on Monday, they will stand a chance of making it as one of the four best number three teams

Michael Olunga salvaged Kenya’s pride at the hands of Tanzania’s Taifa Stars, hitting the winner with nine minutes to go as Harambee Stars won 3-2 in their second Group C match at the Africa Cup of Nations on Thursday night.

The victory saw Kenya retain hope of making it into the round of 16 as with just a point against Senegal on Monday, they will stand a chance of making it as one of the four best number three teams. Tanzania on their side have bowed out of the competition.

In perhaps one of the most thrilling matches at this year’s AFCON and the second highest scoring game, Stars and Tanzania both knew victory for them was a must if their hope of remaining in the competition was to remain.

In a clear attacking intent, Stars coach Sebastien Migne made three changes two his squad, one forced through injury.

David Owino was brought into the right side of defense for the injured Philemon Otieno while tactically, Dennis Odhiambo and Eric Johanah were rested for Johannah Omollo and Eric Ouma.

But, it was the Tanzanians who broke into the lead early when Simon Msuva tapped into an empty net after just five minutes when Stars keeper Patrick Matasi spilled a shot from Mbwana Samatta.

Kenya were found napping at the back and Samatta was accorded acres of space on the right side of Kenya’s defense allowing him time to manufacture a stinging shot that bore the goal.

Despite going down, Kenya put in a fight and had chances to score, twice denied by the crossbar.

In the 13th minute, Ouma came close when he volleyed home from close range but his shot flew straight to Aishi Manula in the Tanzania goal.

Minutes later, Manula was forced to palm Ouma’s corner onto the crossbar as he tried to collect it before Olunga pounced on the lose ball, but his header went against the bar again.

Migne was forced into a tactical change early after just half an hour, pulling out Francis Kahata for John Avire as he reverted to the traditional 4-4-2 format, playing with two pointmen as he sought for goals.

Tanzania had a chance on the other end in the 36th minute when Ramadhan Kessy’s free kick from range almost beat Matasi who was off his line, but he tracked back to tip the ball over for a corner.

Stars found their way back into the game in the 39th minute, Olunga scoring the first of his two with a well taken overhead kick from the edge of the sox yard box.

Manula had come out of his line to collect a free kick floated in by Ayub Timbe but instead let it slip between his palms and bounced on the head of Erasto Nyoni before Olunga rifled it in.

But the celebrations were barely over before Mbwana Samatta made it 2-1 for the Taifa Stars thanks to some calamitous goalkeeping from Patrick Matasi.

The keeper was drawn off his line to try and block an intended cross by Samatta but missed entirely with the burly Genk striker earning space and rifling the ball between the keeper’s legs.

In the second half, Migne made changes immediately, Owino who had a torrid time at right back being taken off for Bernard Ochieng.

It was a better performance from Kenya and they got back on level terms on the hour mark when Johannah Omollo raced in to the near post to head home a cross from Timbe after some training ground routine off a corner.

They had won the set piece after Wanyama’s header off a Timbe corner had attracted a top drawer save from Manula.

Kenya kept the chase with Migne going full attack pulling out Abud Omar for Eric Johannah and this change proved to be the one bringing in the winner.

Johannah made a brilliant run from deep and surged into the Tanzanian half before squaring back for Olunga who took his first touch to get off the physical Kevin Yondani before firing a low missile into the bottom left of Manula’s goal.