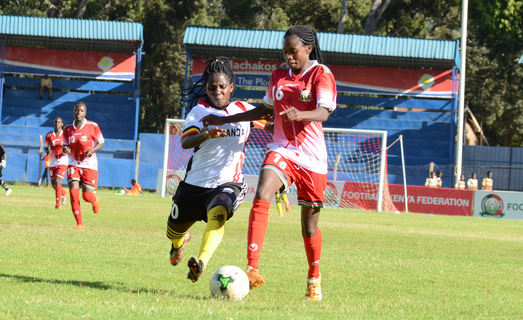 Lilian Adera’s sumptuous 53rd-minute strike handed Harambee Starlets a slim 1-0 win over Uganda’s Crested Cranes in the first leg of the African Women’s Cup of Nations first round qualifier in Machakos on Wednesday.

Adera struck from almost the halfway line catching the Ugandan keeper off-guard as Kenya’s journey to a second consecutive AWCON got off to a positive start.

Unlike different years when Kenya would walk over their East African neighbours, Uganda were a hugely improved side and proved difficult for Kenya to break. Their captain Hassunah Nassifa put in a great shift in midfield.

The first half was devoid of many scoring opportunities but Uganda came close in the 21st minute when Kenya cleared off the line after Asia Nakibuka’s strike from the right found the backline off their feet. Prior to that, skipper Nassifa had come close with a shot from range which went over.

Kenya’s best chances of the game came through the returning Esse Akida whose shot from 25 yards out flew over while Mwanahalima Adam tried her luck from the left but her low shot didn’t trouble the keeper.

In the second half, Ouma started off with changes, bringing on Corazon Aquino for Christine Shilwatso for some fresh legs in attack. Starlets broke the deadlock eight minutes into the second half with Adera’s sumptuous strike from range, having noticed the Ugandan keeper off her line.

Mwanahalima should have doubled the tally five minutes later when she drove into the box after some crisp control, but the keeper saved the effort. Aquino picked up the rebound but her shot from inside the box went wide.

The home side continued pushing and in the 73rd minute Dorcas Shikobe came close with a header off an Adam cross, but the keeper saved at her near post.

The return leg will be played on Sunday at the Lugogo Stadium in Kampala.