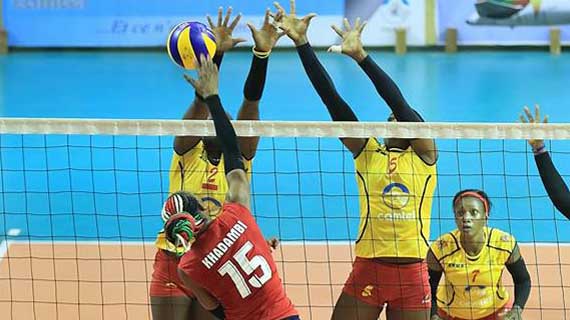 Kenya's Khadambi in action against Cameroon /Photo courtesy of CAVB

Kenya’s hopes of winning a 10th African title were thwarted on Saturday night as Kenya lost to host nation Cameroon during the final match of the 2017 CAVB Africa Volleyball Cup of Nations in Yaounde.

The immediate former champions -Kenya- lost by straight sets of 25-22, 25-19,29-27 to the hosts who are slowly claiming the African volleyball space as powerhouses.

Having come to the finals with a one hundred percent win record including a 3-0 win over Egypt in the semi finals, Kenya’s head coach Japheth Munala had hoped that the script goes his way as he continues to seek his elusive African title as national team head coach.

Despite the loss, Kenya has qualified for the 2018 FIVB World Championships in Japan where Africa will be represented by two nations (Kenya and champions Cameroon).