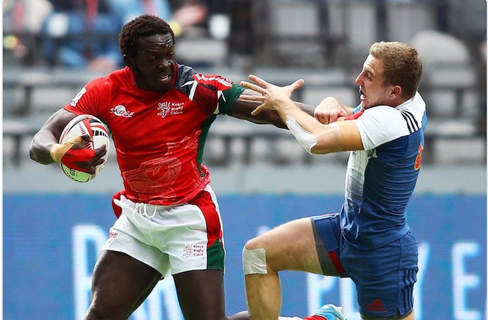 Kenya7s are through to the Vancouver Sevens Main Cup Semi-finals after beating England 12-0 in the quarter-final  at the BC Place Stadium, Vancouver on Sunday.

It was a nervy star for Kenya as star man Collins Injera picked an injury and had to leave the field but he managed to come back and make his contribution later on.

Billy Odhiambo should have scored Kenya's first try but Tom Mitchell's made a good tackle to stop him.

Oscar Ouma led Kenya's break at the stroke of the half time to score the first try with Samuel Oliech adding  the conversion for a 7-0 lead.

Billy Odhiambo made amends in the 13th minute with a beautiful try that gave Kenya the 12-0 win.

Kenya 7s will face USA 7s  in the Semi-final at 01:30am.USA are coached by former Shujaa 7s coach Mike Friday.

In the other Semif-final, South Africa will lock horns with Fiji.