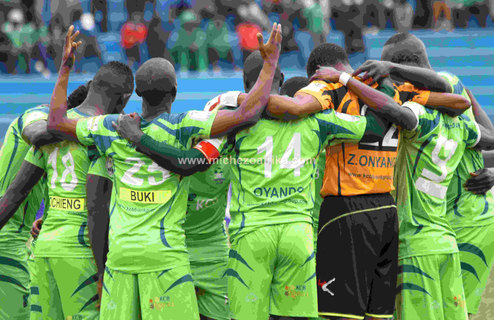 KCB FC will be promoted back to the Kenyan premier League after a three year wait on Sunday if they pick maximum points against FC Talanta. The Bankers are placed second in the standings, five points ahead of third placed Nairobi Stima with two matches left.

KCB picked up a 2-0 win over Coast Stima on Wednesday in Mombasa to inch closer to promotion. Dennis Ng’ang’a broke the deadlock early with a well taken freekick while Chrispinus Onyango made it 2-0 with a simple finish one on one with the keeper.

Nairobi Stima meanwhile played to a 1-1 draw with compatriots Western Stima in Naivasha, a result that saw their hopes of an automatic promotion diminished.

Top scorer Stephen Owusu struck back in the 77th minute after Wesley Kemboi had taken Stima into a first half lead. Nairobi Stima face Kenya Police on Sunday and any drop in points will also hand KCB an automatic promotion.

KCB and Nairobi Stima face off in the final day of the season and if the bankers lose to Talanta and Stima beat Police, then it will make for a great season-finale.

Stima are looking to consolidate the third place spot to make the play-off and they should win their remaining games to do so. They are only two points ahead of fourth placed Ushuru who won 4-0 away to GFE 105 to bounce back from last Friday’s 1-1 draw with St. Joseph.