KCB’s Kamau angles for promotion back to KPL 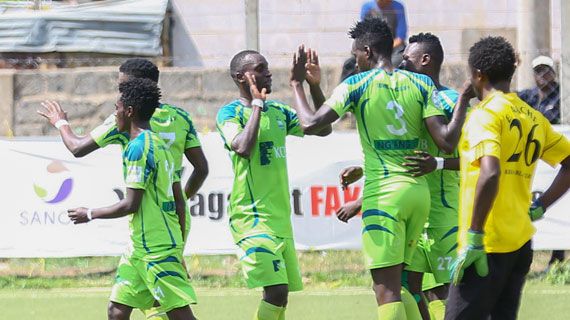 Kenya Commercial Bank FC Head coach John Kamau is angling to get the team back into the Kenyan Premier League. The bankers are placed third in the standings with 46 points after 23 matches, one less than leaders Western Stima (49) and Ushuru (46).

“We have started the second leg very well and I am happy that we are getting results. Our target is to take a game at a time and pick three points. We know the journey is still long but we will work hard to get there,” the tactician formerly with Thika United and Posta Rangers said.

The bankers have won their last three matches including the midweek assignment against Kibera Black Stars where they won 2-0 at the Camp Toyoyo Grounds.

With 15 rounds of matches left, the bankers are confident they can get into the top two automatic promotion slots. This weekend, they will be taking on 11thplaced St. Joseph Youth at the Camp Toyoyo Ground.

It will be a tough tie for the bankers as they have only beaten the Nakuru based side once in their last three meetings. In the first leg this season, they drew 0-0 in Nakuru.

Meanwhile, leaders Western Stima will be looking to keep the wheel rolling as they look for an immediate return back to the top tier. The powermen have won their last five games to move back to the top of the NSL log and usurp Ushuru who had assumed leadership.

Stima will be at home at the Moi Stadium in Kisumu taking on relegation battling GFE 105. The Eldoret based GFE sit bottom of the standings with a meager 14 points and have won only once since March beating Kibera Black Stars 2-1 in Eldoret on 16th June.

Second placed Ushuru will be in action on Monday, taking on Coast Stima at the Camp Toyoyo Ground. Ushuru have won four of their last five games and will be looking to pick a fifth and hope Stima falter on Sunday for them to take charge of the leadership of the table.

There will be equally a gigantic battle at the bottom of the table when Kakamega High School’s Green Commandos take on Isibania in Awendo on Monday. Green Commandos are 16th in the standings with 19 points, one above Isibania who occupy one of the thee relegation slots.