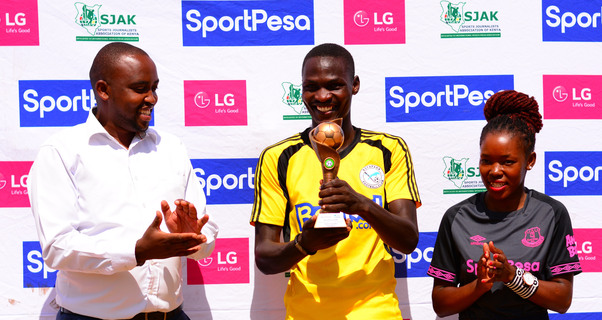 Ugandan striker Umaru Kasumba has been named the February Kenyan Premier League player of the month after his four goals in three games helped Sofapaka scale to the top three in the league standings.

Kassumba picked the award ahead of Bandari’s Congolese striker Yema Mwana and Gor Mahia’s Nicholas Kipkirui having garnered a total of 19 points in the final voting process by the Sports Journalists Association of Kenya football commission.

Mwana came in second with 15 while Kipkirui finished in third with 14 points.

Kasumba opened his February account with a goal in Batoto Ba Mungu’s 2-0 win over Kariobangi Sharks, before netting Sofapaka’s opener as they came from behind to snatch a point against Kakamega Homeboyz at Bukhungu Stadium, and wrapped up the month with a brace in an emphatic 4-1 win over then league leaders Mathare United at Kasarani.

"I'm very pleased to win this award because it is my first ever. It presents a challenge to me for i have to keep performing. There cannot be room for complacency since i want to win the golden boot this year. I have the advantage of being coached by someone who won the golden boot four times during his playing time." said the jubilant Ugandan

He walks away with Sh100000 courtesy of sponsors Sportpesa, a personalized trophy and a 49 inch TV courtesy of LG Electronics. Sofapaka gets Sh100000.

He becomes the third recipient of the award this year after Kakamega Homeboyz' Peter Thiong'o who won the December award, and Bandari FC winger Abdalla Hassan who bagged it in January.