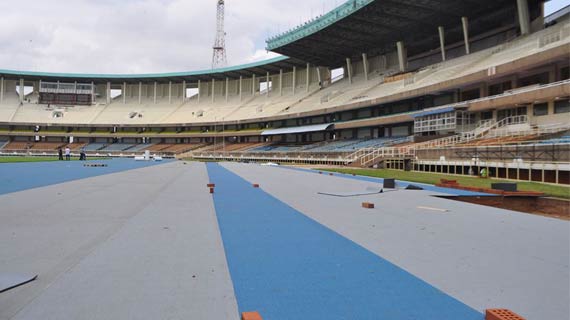 With days to the IAAF Junior Athletics championship to be held in Nairobi, contractors at The Moi International Sports Center Kasarani are working round the clock to ensure completion of upgrading works before the official handing over ceremony ahead of the world games.

Works at both the Championship Village and laying of the tartan track are ongoing and the team is optimistic that this will be finalized in good time.

Speaking to Michezoafrika.com at Kasarani, Local Organizing Committee chairman Mwangi Muthee confirmed that the Blues and Grey tartan track shall be ready by Saturday "All that is remaining is to lay the track and it doesn’t require a long waiting period because once the glue is dry the track shall be ready, the major work has been done and now is just the final touches." He said.

"We definitely would have wished to be done by now but we got delayed when the tartan got stuck in Mombasa. Both Kasarani and the Championship Village at Kenyatta University shall stage a dry run this Saturday before the handing over Ceremony to IAAF team scheduled for Monday next week." Muthee confirmed.