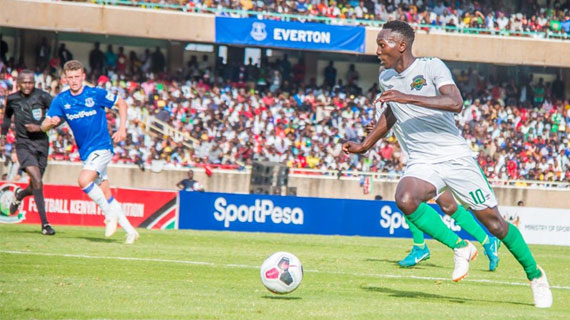 Kariobangi Sharks custodian Brian Bwire  was the star of the evening in Nairobi as the hosts upset the odds to beat English Premier League side Everton 4-3 in post match penalties to win the Sports Pesa Cup at Kasarani stadium in Nairobi.

Bwire made two fantastic saves  during the penalty shoot outs and stepped up to score the winning spot kick for the host team.

The two sides had played to a one all draw in regulation time  with the match forced into penalties to determine the winner of the pre season encounter. This was the first time an English Premier League team has visited Nairobi

Sharks had a 1-0 advantage going into the break after Abuya, Duke scored an intelligent goal , duping the defense in the 18th minute.

Joe Williams equalized for  Everton in the 54th minute delivering a low free kick past the wall from the edge of the box.

Everton FC touched down in Nairobi on Saturday morning aboard a chartered plane ahead of their friendly match. The contingent includes popular players such as Theo Walcott and Andre Gomes.

In their first visit to Africa courtesy of their sponsors SportPesa, Everton beat Gor Mahia 2-1 in the friendly played in Tanzania.