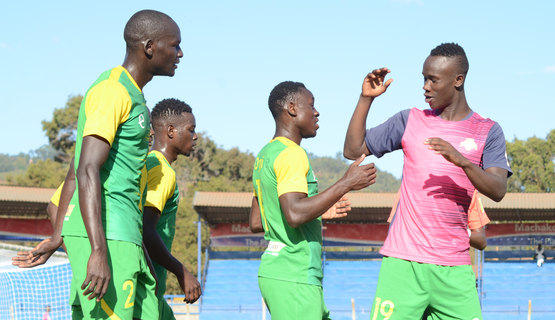 End of the road as Wazito joins Thika United in relegation

Wazito FC and Thika United will be officially relegated from the Kenyan Premier League on Thursday if Chemelil Sugar beats Thika. Wazito’s minute survival hopes went up in smoke on Wednesday after losing 2-1 to Kariobangi Sharks to remain four points away from partial safety and the team is already resigned to the fact that they will be playing second tier football next season.

Thika are all but relegated and even a draw on Thursday will see them officially axed. They are nine points away from safety with three matches remaining, and their goal difference is neither inspiring.

Wazito on the other hand will only survive if Chemelil lose all their three remaining games and they win both of theirs, but this will only mean they occupy the 16th spot where they will have to take the play-off between the third placed team from the National Super League.

Wazito’s first half performance did not inspire belief that they are in for survival.

They deservedly went a goal down after 24 minutes when Shaphan Oyugi headed Sharks into the lead after connecting to a Bolton Omwenga cross. The left back landed the ball after a poor clearance from Wazito.

Sharks had a chance to double their tally two minutes to half time when Eric Kapaito did well to arrive first to the ball before keeper Musalia, but his touch away from the sliding goalkeeper was too heavy rolling out of play.

In the second half, Ouma made changes, Piscas Kirenge coming on for Simon Mburu, but the new man did not last more than a minute as he went down, surprisingly, even without touching the ball. He was replaced by John Katua.

Wazito were better offensively especially with the introduction of Edwin Lavatsa and they suddenly gave the Sharks backline plenty to think about. The former Gor Mahia and Tusker forward put some hope for his side in the 75th minute with a rasping shot from the edge of the box after a short start to a corner.

But, all that hard work came to nothing when Harrison Mwendwa took advantage of a defensive error at the stroke of full time to win the ball and chip it over Martin Musalia for what would be the winner for Sharks.