Kamworor roars to World Half Marathon hatrick in Valencia 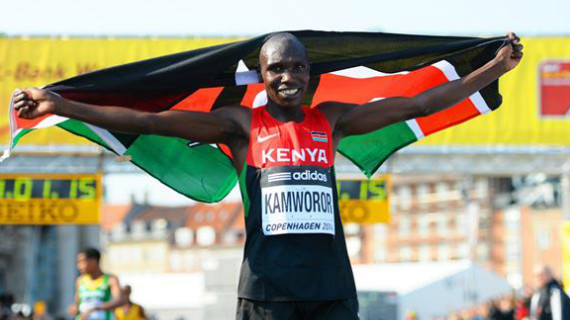 Kamworor roars to World Half Marathon hatrick in Valencia

Geoffrey Kamworor ran a superb race as he picked up his third consecutive World Half Marathon title, winning the race on a sunny Saturday evening in the Spanish City of Valencia after timing 1:00:22.

However on the downside, Kenya lost the men’s team title to Ethiopia who had four runners finishing between Kamworor and Kenya’s second best placed athlete, leonard Barsoton who finished a distant 12th.

The women’s team title also went to Ethiopia with Kenya having been hit numerically after two athletes, mary Wacera and Fancy Chemutai withdrew from the race on Thursday.

But despite losing the team title, Kamworor who had beamed in confidence before the race proved that he is one of the best road runners, more like his idol Eliud Kipchoge.

The front-running Kamworor took control of the race from early on and pulled away from the rest of the pack after the 15km mark. Having crossed the 10km mark in 29:28 with Kamworor still leading, he took the pace a punch higher five kilometres later, establishing a 70-metre gap between him and the second placed athlete.

He went on to blaze the entire course with Kenyan-turned Bahraini Abraham Cheroben finishing second in 1:00:22 while Eritrea’s Aron Kifle took bronze in a time of 1:00:31.

In the women’s race, world record holder Jepkosgei seemed to have started well controlling the tempo, but failed to hold on to the pace with Ethiopia’s Kebede steaming away after 15km.

“The wind was too strong for me today. I am very happy with my second place,” Jepkosgei said after the race. Jepkosgei clocked 1:06:54 at second while Kaveke finished the race in a new Personal best time of 1:06:56.