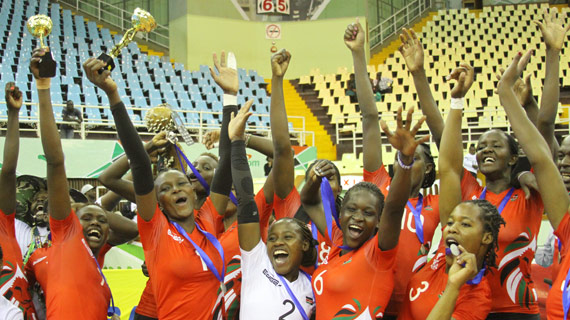 Kenya vs Rwanda at the Kasarani gymnasium in Nairobi

Kenya has qualified for the world FIVB U-23 championships to be held in Slovenia in 2017. Kenya will join Egypt who finished at the top of the standings after completion of the five nations Africa junior championships at Kasarani in Nairobi.

Egypt won all her four matches to finish at the summit of the  tournament table standings with Kenya finishing second  with nine points from three wins.

This was always going to be a hard match as both teams were tied on six points from two matches prior to the final action.

Kenya started well winning the opening point that guided their momentum to an 8-6 lead by the first technical timeout.

Five consecutive off court serves  gifted Rwanda free points as they stretched  to lead the hosts 16-13 by the second technical timeout.

The three points trail prompted the technical bench of Catherine Mabwi and Josp Barasa to  bring on injured captain Pauline Wafula whose impact lifted Kenya back into the match. Kenya rallied from three points down supported by Ann Lowem's two powerful blocks as Kenya cruised to win the set  25- 23

The second set was full of errors especially by the hosts who showed frail response in reception  with Rwanda earning  crucial points on service. The Rwandese, coached by former Kenyan international Paul Bitok outclassed the hosts with mental strength as they rallied from 18-21 to win the second set  23-25.

The third set was a balanced affair  until after the second technical timeout when Kenya pulled away thanks to superb blocks on the net by towering Yvonne Sinaida and powerful strikes by the lethal Yvonne Wavinya. Kenya won the set 25-22

The fourth and final set was easy for Kenya who cruised to an 8-2 lead at the first technical timeout with Rwanda now exposing a drooped attitude.  Despite an attempted recovery by the Rwandese girls, Kenyan maintained the lead  to win the match and secure the second ticket to Slovenia.

"It was a tight match and maximum respect to Rwanda who played extremely well. We acknowledge that we gifted them so many points from our errors but we are thankful we now have an opportunity to recover and strengthen our weak points."  said Kenya head coach Mabwi after the match.

In an earlier match played at the same venue on Thursday afternoon, Egypt finished their campaign with a 3-0 (25-16,25-10,25-19) win over Botswana  to consolidate their lead with one hundred percent win record.